Dreams of the Fox Mini-Bike

When I was 12 years old, I somehow convinced my parents to get me a mini-bike. I'd saved a few bux and they put up the rest. 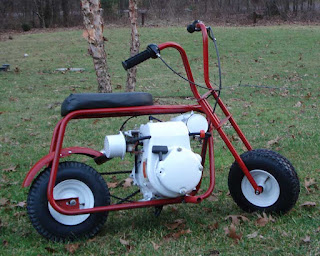 What is a mini-bike? Basically, you have a few feet of steel tube bent into a smallish bike frame. Bolt a couple 10-12" tires on, throw a lawn mower engine under a foam rubber seat, and you're off!

Mine was a Fox Sprite with a Tecumseh 3-horsepower lawnmower engine. The same frame as the one pictured here, only with a smaller engine and tires.

I could barely fold my lanky frame over this thing, but spent a couple years zipping around the woods, parks and farmlands adjacent to my neighborhood, situated near the border of Longmeadow and East Longmeadow, in western Massachusetts.

Come fall with its wind, cold and mud, come the full-on dusty dog days of baking-hot August, you'd find me blasting full-throttle over the bumpy baseball field of Turner Park, or through the undulating dirt fire roads of nearby Wolf Swamp neighborhood.

Really, the only things that could compete for my attention were A) Spider-Man comics drawn by John Romita, and B) a plucky girl named Cathy who lived a couple blocks away. Homework? What's that?!

More than a bit dangerous, I was lucky to get only a few scrapes in falls from the bike. Helmet? Who wore helmets on mini-bikes in 1969? I had an insane amount of fun and learned how to take an engine apaprt (if not put it back together!).

Did you ever get chased by Longmeadow's Peacekeepers (e.g. Johnny Barkman)?

Johnny Barkman was my nemisis! Later on, I got a Honda mini-trail 50, and Johnny Barkman devoted his life to chasing me around on it. Didn't that stupid old fuck have anything better to do?!

He once chased after me and Steve Cimini for throwing snowballs at cars, and he had his revolver out!

How did that old goat keep up with me in a mad dash through the woods, is what I want to know!
He was imbued with invincible alien powers against the pre-teen set, heroic Johnny was.

Man. In my childhood even a regular bike was my pipe dream. That's why I've got a cheap electric bike as soon as I got my first salary. You're so lucky that you've got this one! :)