How Not to do Business

In the course of running my custom T Shirt printing business, I try to be honest and straightforward with my clients. This makes sense, as I can live with myself (for starters), but it engenders the true lifeblood of any business: New clients.

Here's how it works. You order T Shirts from me. I do a good job. You tell someone else who needs T Shirts, they come to me with confidence that I am not a schmuck who will rip them off. Recommendations bring in 75% of my new accounts, with marketing and advertising taking care of the rest. Any small business person will tell you a variation on this schema.

When I run into a business person who burns me, it upsets me. Yes, it pisses me off. But more important, I just want to slap them around and yell, "Can't you see you are just fucking yourself?" If someone burns me, I will not give them a recommendation. I may even do what I am about to do, tell the story of how they did it to me.

With good business communication, I generally can avoid rip offs. But I've run into a couple this summer. DHL (the shipping company) burned me by promising a refund after missing an overnight delivery. Then they refused the refund because "I had not notified them in writing within 14 days". Well, I did not know that was the policy until the refund was refused! Thanks DHL! You suck.

I'd been enthusiastically using DHL since last year when I moved my shop from Oakland to Portland. I recommended them to numerous friends. I was suckered by their marketing campaign promising great service.

Then, this June, they started missing shipping dates, and even held some shipments in their warehouses for no apparent reason. The bullshit about the refund was the last straw. What can I say? I switched back to Fed Ex ground. Works fine.

The sort of sleazy clay-footed corporate greed as exemplified by DHL is to be expected from big corporations. The lack of willingness to take responsibility for shitty work will add a few dollars here, a few pennies there to the bottom line; for many companies, this is the only measure of performance.

Within the corporate hierarchy, every cog is keen to cover their ass and do the bidding of their corporate overlords, who in turn are slave to the overarching corporate dictate to keep the stock price rising no matter who you fuck over. Again, the ultimate effect is that people do not trust big corporations, and are cynical about corporate public relations and advertising claims.

I expect better behavior than this from the small businesses I buy from, and sell to. Most of the time, if I hold up my end of the bargain, the other party does the same. Recently, I had an experience with a small business supplier that was pretty unfortunate. They ripped me off for about $1100.00 worth of their service, spoiling almost $500.00 of raw materials I supplied in the process.

Here’s the set up. I print thousands of T Shirts each year for a client who has a successful T Shirt store. About 1000 – 1200 of these are printed on Tye Dyed shirts. It is up to me to buy blank shirts, arrange for the tye dying, print the shirts and ship to the store.

I have used a variety of tye dyers over the past decade. One of the best I found, or so I thought, was Kerr’s Cotton Creations, located in Montana. I had used them four or five times for dying lots of about 300 shirts each time. Their colors were quite bright and vibrant, but I had to ride their asses a bit about my clients prime directive: “Bright, tight and no white”!

This meant that no white (the blank shirts were white before dying) could show through the dye job. Kerr’s had done OK on the “no white” request, but not great. Thus, I made a real point of emphasizing BRIGHT, TIGHT AND NO WHITE with each order. In truth, almost every tie dye shirt has a least a tiny bit of white showing through, and it is understood that it’s OK, as long as it’s kept to a minimum.

In June of 2006, I ordered a batch of 288 tie dyes from Kerr’s. I drop shipped white blank Ts to them. Just over a week later, the new shirts arrived. I was shocked when I opened the boxes. White streaks screamed through the dye job at me. I would say that 25 – 35% of the shirts were white. It was by a long shot the worst job Kerr’s had done for me.

I printed a batch and shipped them to my client, a mistake on my part. Looking back, I was a bit in shock about how bad the shirts looked, and I rationalized to myself something like this: “They can’t be that bad, I just have expectations that are too high.” But deep down, I knew—this was a batch of shitty tie dyes, and it was a bad decision on my part to try to pass them off on the store. I should have sent the shirts back immediately and asked that they replace the blanks and dye the job over. The store called me, pretty pissed off. I had to admit that I knew the shirts were not up to par. We worked out a solution where the batch of 90 or so shirts would be sold at a discount. I felt chagrined that I had attempted to use shirts that were clearly not up to par.

I called my contact at Kerr’s, to point out that this batch of tie dyes was not up to his usual standard of quality. The guy acted as if I was trying to sell him a shit sandwich, saying “no two batches are alike”. No shit, dude. I’ve been buying tie dyes for ten years. I know well that no two batches are alike. That is a very different matter than delivering shit work. What part of NO WHITE do you not understand? I asked for a refund, and was refused. I later email a request for a refund and got no reply.

I have learned over time in the shirt business to listen to complaints when they come in, and work to find a solution to client problems, even if it comes out of my pocket. Usually, a complaint has some reasonable aspect to it. Sure, I have had unreasonable complaints, but even then I prefer to communicate on a frank and honest level with the client.

Once I printed a process color job for a big regional baker of upscale breads. I thought it was one of the best process shirts I’d done. The owner called up and told me it was one of the worst shirts he’d ever seen. What could I say? He was entitled to his opinion, but I told him I thought it was a great shirt. This dude was a perfectionist, famous for driving people nuts with his demands. Lucky for me, that was the last I heard of him.

Back to Kerr’s, I was disheartened that this guy would hand me a line of bullshit like that. I’d given him at least 4 – 5,000 bucks worth of biz over maybe an eighteen month period, but he could not have cared less. Not only did he show me a complete lack of respect, but it’s just bad business. Can’t say I can recommend Kerr’s Cotton Creations at this juncture.

I'll let you know if that changes, you never know.
Posted by Steve Lafler at 9:21 AM 1 comment: 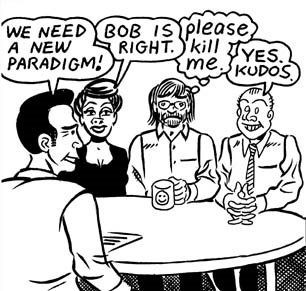 Steve Lafler
Manx Media proprietor
Posted by Steve Lafler at 8:54 AM No comments:

Manx Publishing party with the Wigbillies 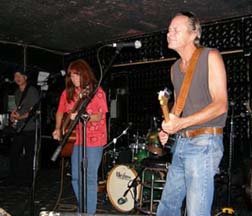 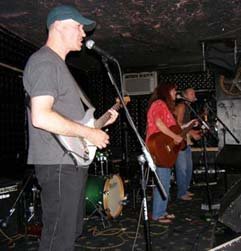 Top: Wigbillies Paul Therrio and Mary Fleener get their groove on at the Casbah in San Diego on July 20.
Bottom: J.R. Williams plays his little electric and croons with the Wigbillies.

Thanks to all the bands who played our publishing party for 40 Hour Man at the Casbah on July 20 during Comic Con International: The Wigbillies, Thee Corsairs, The Creepy Creeps and Deadbolt.
A damn fine time was had by all! We got a few dozen alt comics geeks out there, and lots of stylish locals came out to see the great line up of talent.
Posted by Steve Lafler at 9:00 AM No comments: