After all, he is Lou.

Here's a killer video of Sister Ray, with Robert Quine on guitar. 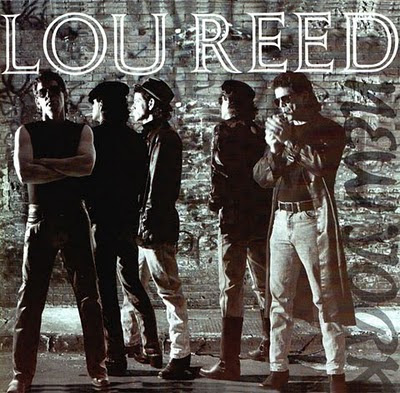 Lou Reed, New York, 1989.
This is an insanely great record. I like Dirty Boulevard, Busload of Faith, Straw Man and Romeo Had Juliet.
Posted by Steve Lafler at 7:19 PM 1 comment:

We human beings can do better. It is high time we release ourselves from the violence and ecological disaster of human history.
I propose an end to hierarchical, top down structural models. Yup, the stuff found at your job, government, school and other institutions we encounter in daily life. We need to share responsibility, with its burdens and rewards, in cooperative structures. Whenever and wherever power is concentrated in few hands, the natural outgrowth is greed and abuse.
Condescending, patronizing elites may argue that the masses can't shoulder responsibility. This argument underlines their fear of losing power and control.
It's noteworthy that Dutch and English settlers in the Northeast (of what is now the United States) marveled at the egalitarian cultures of the Iroquois and Algonquin Indian federations. It's generally acknowledged that the new country was influenced by their democratic models (native American societies in other areas were top down hierarchical).
In industrial and post industrial modern times, we have no functional large scale cooperative nation state models. With the Soviet Union, Lenin imposed a dictatorship out of a war situation, and Stalin took it to insane heights as history's bloodiest dictator. Not cooperative! Nor communist, really.
I am not a Marxist, but I have been a member of four successful co-ops, each of which delivered equal benefits to all members, while exacting labor or fees from them.
Co-ops are beautifully self regulating, like water finding its own level. If the members lose interest, they ultimately collapse like the Amherst Food Co-op I was once part of. No problem, it served its members well during its tenure. Another, Warehouse Artist Studios in Eugene, Oregon, provided great, inexpensive studio space to a dozen artists for several years, even surviving a manager/member who was embezzling funds!
Hierarchical, top down structures are outmoded, serving only the polities (okay, the swindlers, megalomaniacs and thieves) at the top.

Some other time I have to address the problem of power structures that use force and violence to gain and maintain power. That is a huge mess that dovetails with my subject here, but will need to be tackled separately.
I've been thinking like this for a long time. That is why I've taken part in several co-ops. They are messy, but I'm willing to take the risk and do the work to develop the co-op model.
Posted by Steve Lafler at 4:22 PM 2 comments: 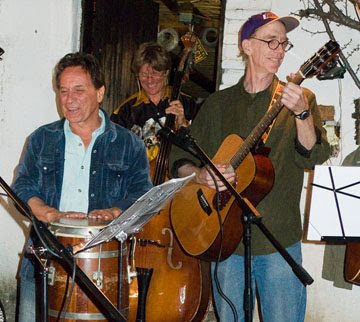 You never know who is gonna turn up at the Bodega! I'm jammin' here with Kim Berly of the Stampeders, premier Canadian rockers, and on stand up bass is John Harlin, noted expert mountaineer. Photo by Tania Roman
Posted by Steve Lafler at 6:19 PM 2 comments:

Here's a rough version of Ripe Pineapple Drunk, a song I wrote about Corn, Biodiversity and the Monsanto Corporation. And about being a hippy and a punk.

I'm gonna polish up my tunes and get around the states this summer, caterwauling with my guitar and promoting my new book El Vocho. Also gonna get some decent recordings done.

I've been fumblin' around like a Caveman trying to figure out how to embed my tunes in this here blog. I done got sore thumbs bangin' away at Google, messing with code. Me sorta dumb about this stuff, and I could not get a handle on it.
So I went beggin' to Nate Beaty, world class cartoonist and webster supreme. It took Nate like 5 seconds to generate the info I needed (try DivShare). Hey Nate, I owe you a Mezcal. Or an ice cream cone, or something as good as your advice! Thanks!
Posted by Steve Lafler at 8:16 PM 1 comment:

A New Chapter in My Life as A Teenage Werewolf 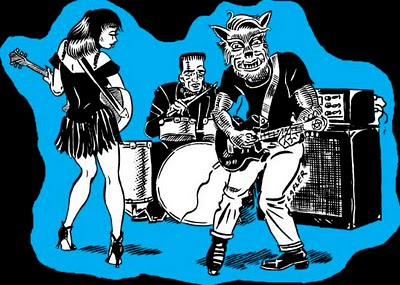 Since I moved to Oaxaca almost 3 years ago, I've sort of been drafted into The Bodega Boys, a local "Oaxacabilly" band. Inspired by the thrill & fun of playing live music, I've penned a number of my own tunes and I'm gonna be performing in the U.S. this summer as I tour in support of my upcoming graphic novel, El Vocho.
I've begun experimenting with recording and I'm looking to issue an Ipad version of the book which will include the songs in it. That being the case, I'm trying to figure out how the hell to post music on the web in some functional way that is relatively easy for me, and accessible to anyone foolish enough to listen to my caterwauling.
So here it is, a link to my page over at lastFM. This is just a little trial to see how it all works.
Truth is, I'm gonna get myself in a decent recording studio and get down some reasonably tight, well recorded versions of my tunes before going much farther with posting music, but ya gotta start somewhere and assess how to proceed, so there it is!
There are two songs on the page, a cover of the traditional tune John Hardy, and my homage to the Cramps, You Got That Hair.
They are set up for free download. 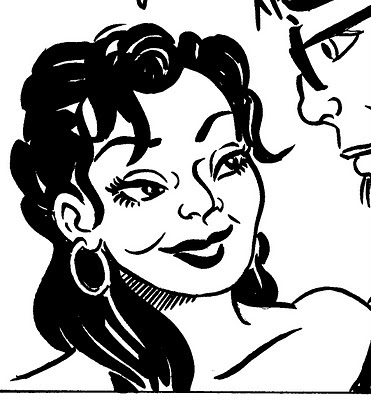 Email ThisBlogThis!Share to TwitterShare to FacebookShare to Pinterest
Labels: john hardy, oaxaca, Steve Lafler, the cramps, you got that hair

For awhile I've suspected that I'm an anachronism -- that is to say, I like email and it's my primary mode of personal and business communication.

And of course, half the world are already cyborgs, with a blackberry or iphone all but grafted onto their face. Yes, I'm one of those Luddites who expects people to have a conversation with me when they are having a conversation with me, as opposed to compulsively staring at and molesting their electronic brain/external digital Id. I know, I'm a 53 year old guy, my thumbs don't text, not yet anyway.

Still, I earnestly sit and compose emails. I carefully consider my spelling, meaning and grammar, and indeed I edit before pressing send. Well, most of the time, anyway.

Meanwhile, I'm experiencing a sort of diminishing return on my (hopefully) pithy and eloquent efforts. People are not emailing me back! And I'm not even asking for money! Taking the digital pulse of communication, I can only come to one conclusion: Email is dead!
Posted by Steve Lafler at 4:18 PM No comments: