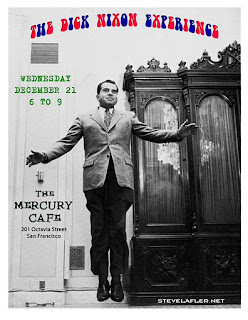 The Dick Nixon Experience will appear at the Mercury Cafe, 201 Octavia St. San Francisco on Wed December 21, 6-9 pm as part of the Cartoonist-Palooza Holiday Gift Show.
Scott Hoover, bass. Steve Lafler and John Caploe on guitar. Joe Kaline, drums. Dave Cherry, saxophone. We'll play some bad ass Oaxacabilly music. Punky country blues the way you like it.
Cartoonists on hand for the night will be Lloyd Dangle, Mats!?, Jeff Roysdon and myself. See ya there!

Posted by Steve Lafler at 8:50 PM No comments:

The Legacy of Dylan Williams

About four years back, I wrote an article entitled Is Print Dead, or does it Just Smell Funny? The article ran in Chicago based Alarm magazine and I subsequently posted it in this blog. It focused on the comics industry and it's prospects as a print medium in the face of the rising wave of electronic media. I interviewed several comics people for the piece, including Dylan Williams, cartoonist and publisher of Sparkplug comics, who passed away two months back.

Dylan was passionate on the subject, and had this to say: “I don't believe print is dead. I've actually had a lot of time spent thinking about what I'm trying to do with my life and the whole idea of punk rock is something I keep on coming back to. I've been a punk since I was a kid and those values are really my core values. If you feel bad about stuff the only thing we can do is fight it. I love print, love drawing, and love art comics. I hate what comics became in the 90s, things like web comics, ‘the new independents’ and all the money-speak that took over comics bugs me. I'm an underground kid and that is my idea. I think, all we can do is light our little fires and stoke them. I don't ever feel like giving up.”

Looking back, I'm impressed by Dylan's accomplishment in building avenues for distribution in comics outside the Diamond Comics Distribution paradigm. He distributed directly to a growing network of stores supporting grass roots art comics, and worked with other grass roots distributors who were springing up.

I've been publishing comics since 1981, and have had some modest success with selling books through mainstream distributors like Diamond. It takes a maverick visionary like Dylan to show me that in the long run, art comics (or underground, punk, or which ever label you prefer for auteur comics) need their own grass roots distribution network.

I moved to Oaxaca, Mexico in 2007 and was wondering how I would continue to publish and distribute my work. Dylan stepped forward and offered a hand, arranging for my 2008 graphic novel Tranny to be distributed by Diamond.

When I finished my next book, El Vocho, Dylan declined to offer the book through Diamond. His considerable energies had shifted to where the best results could be produced, with the nascent distribution network he was building on behalf of his publishing company, Sparkplug Comic Books. He did pick up several copies of El Vocho for distribution, great guy that he was.

Dylan's were painstakingly grass roots from what I can see. He cultivated relationships with fans, retailers, publishers and distributors to get the best play for the artists he published, whose work he was devoted to. He faithfully hit the indy shows and put his best foot forward in pursuit of his vision.
This is the legacy of Dylan Williams in my life. He showed me what I should have known all along, that selling auteur comics is really a brick-by-brick business. You can't depend on a large corporate entity for anything, you have to follow the love. 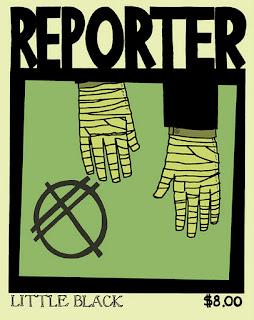 Many of Dylan's close friends and associates had wonderful and insightful things to say about him at the time of his passing. I've now had time to assess what Dylan meant in my life, thus this post. I was friendly with Dylan, without being an actual close friend. He was warm and true, self effacing to a fault, and unerring in his vision and taste. He had an understated but wicked sense of humor. In short, a fine human being.
Posted by Steve Lafler at 9:23 AM 1 comment: 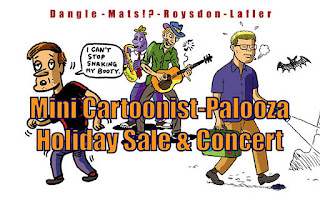 Join us at the Mercury Cafe Wednesday, December 21st, 201 Octavia St. in Hayes Valley, for a convivial good time.


Here is the PR rap for the event:

Bay Area cartoonists Lloyd Dangle, Mats!?, Jeff Roysdon and Steve Lafler join together to bring cartoon art gift items from graphic novels to ceramics to the Mercury Cafe in Hayes Valley on December 21 from 6-9 p.m.
Dangle is best known for his long running Troubletown strip, wherein he slings deftly aimed arrows at liars and thieves from across the political spectrum. Dangle offers an array of Troubletown related books and merchandise, hilarious works featuring his signature brilliant illustrations.
Mats!?, the accomplished painter and screen printer with a crackling urban sensibility, is best know for his travelogue graphic novel Asiaddict on the Sparkplug imprint. Mats!? arrives packing an array of stunning screen printed stickers and original paintings as well.
Cartoonist, animator, and painter Jeff Roysdon offers unique ceramic pieces featuring his cuddly, heart felt-yet-acerbic visions and spectacular level of craft, along with original paintings.
Lafler, late of Oaxaca, Mexico, brings his band The Dick Nixon Experience into the Mercury, rounding out the evening's entertainment with some acoustic "Oaxacabilly" music. Lafler marks his return to the Bay Area with his graphic novels El Vocho, 40 Hour Man and Bughouse.

The Mercury Cafe is located at 201 Octavia St.
Admission is free. 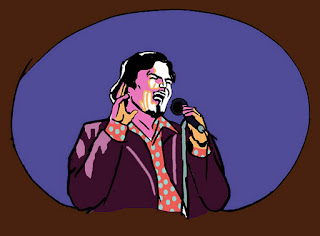 I've created a music video for my song Jack Black and posted it here -- it's a semi-animated cartoon narrative. The music was recorded at the Casa de las Escaleras in Oaxaca by Bill Stair, my co-conspirator in Radio Insecto, our cowpunk band. There is a line in the song, "I don't like Jack Black's movies anymore / he used to be the best now he's kind of a bore." The joke is, I'm a big fan of Jack Black--that's why I wrote the tune!

Posted by Steve Lafler at 5:44 AM No comments: 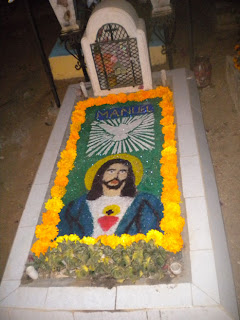 Nothing gets to the heart of Dia De Muertos in Oaxaca quite like a visit to the Panteon Municipal in the town of Xoxochitlan on the night of October 31.  I went with my family, took a few pics and enjoyed an incredible vegetarian tlayuda with quesillo, mushrooms, radishes and avocado at a comal outside the panteon, along with a medium hot light  brown salsa that was sublime. We also got some hot cider that calmed the chill of the muertos wind, and our friend Carrie got a cider with a shot of mezcal in it to really beat that chill!

Last night, Nov. 1, we went to the Zocalo in Oaxaca centro and saw the gay friendly comparsa (parade) with wild costumes of traditional themes like the grim reaper and the devil along with a pile of queens in drag. Very good band and great dancing, enjoyed from the confines of Bar Jardin where my kid enjoyed french fries, I had a vino tinto and my pal Carrie enjoyed a passable tobala mezcal for a mere 31 pesos! Not a bad price for a ringside seat in the zocalo. I was dressed as Joey Ramone--ripped jeans, sunglasses, leather jacket, black T shirt and a big ol' wig over my bald head. Lot's of cool kids wanted their photo taken with Joey!
Tonight we will watch some El Santo Monster movies at a hipster gallery in town before moving on to the Panteon San Felipe. 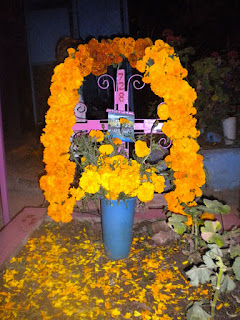 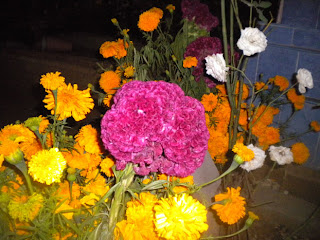 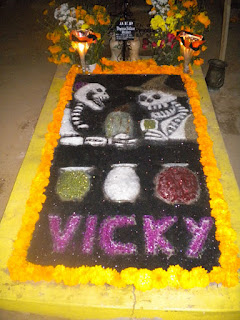 Every so often I remember that the graphic novel, 40 Hour Man, by myself and writer Stephen Beaupre, is available as a free download at Lulu.

This is Beaupre's manic, hilarious account of his various working class jobs, with appropriately nuts illustrations from your truly.
If you've ever had a crap job or an insane jerk for a boss (who hasn't?), then this is the book for you.

The print edition of 40 Hour Man is also available from Lulu, along with other graphic novels from me including El Vocho.
Posted by Steve Lafler at 11:42 AM No comments: