With the help of publisher CO2 Comics, I've realized a long held dream over the past two years with the publication of two legacy volumes collecting my two long running comic book series, Dog Boy and Bughouse. I've spent three decades pushing at the limits of the comics medium, challenging myself to create works that expand the range and possibilities of narrative art. I'm delighted that Gerry Giovinco and Bill Cucinotta of CO2 have collaborated with me to produce two spectacular volumes celebrating my contributions to the comics form thus far.

Back in 1981, I published my first comic magazine Mean Cat at the dawn of alternative comics. I thought myself happy to push this one comic book into the world, claiming my own small corner of comics immortality. Really, I knew better. I'm just as gung-ho now, some 32 years later, to produce outrageously great comics work and proselytize until I've won over the entire universe!

I worked furiously throughout the '80s on my Dog Boy series, ultimately producing a good 500 pages of comics. Along the way, Dog Boy #1 from Fantagraphics in December 1986 garnered orders of more than 10,000 copies, signaling the arrival of Dog Boy as a force to be reckoned with.

This past summer, CO2 put it all together in Doggie Style: The Complete Dog Boy, a 488 page collection. It's a walk through some of the best alternative comics of the day, delivered in a classic brush style with my singular improvisational narratives, sometimes psychedelic, at turns overtly political. 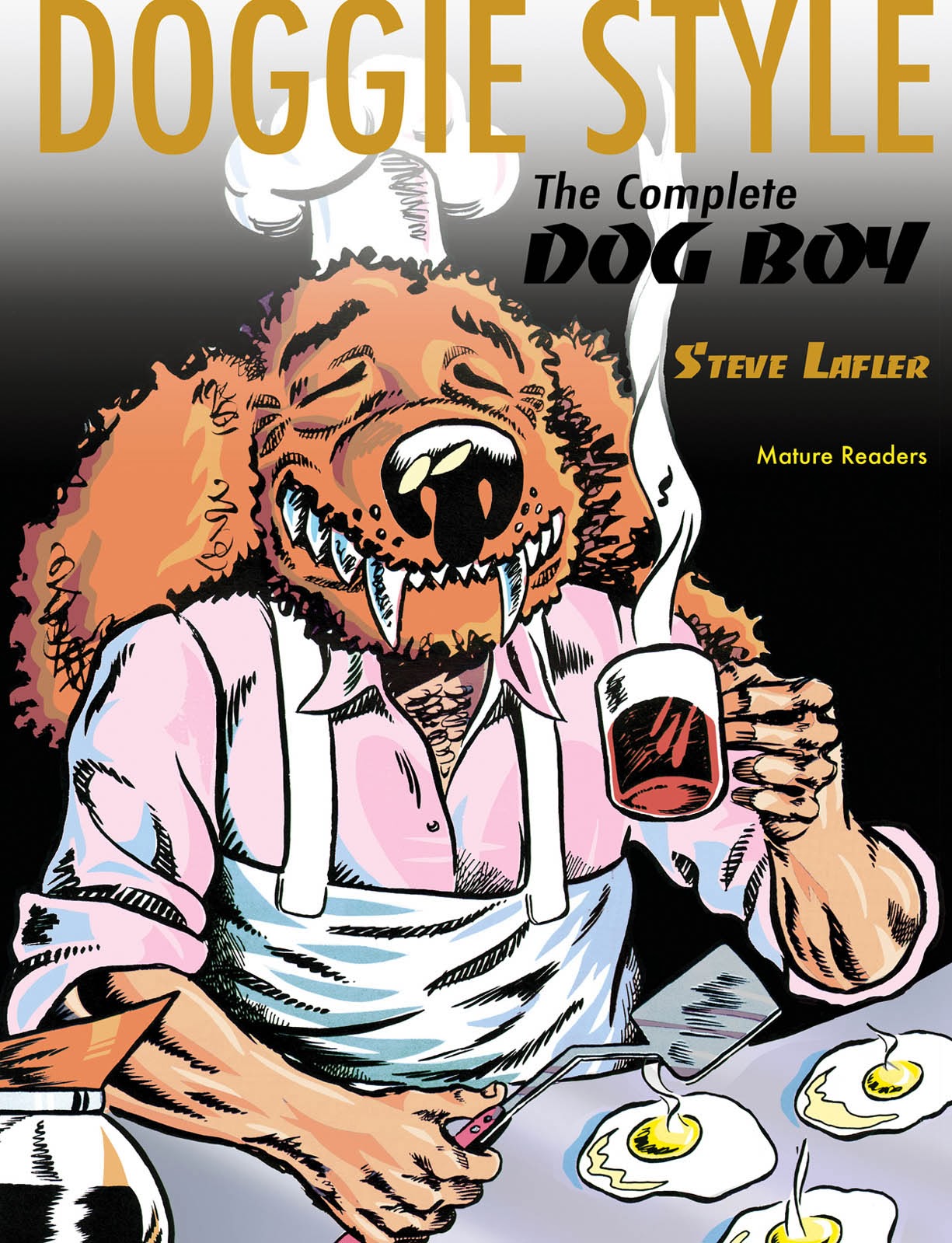 In the summer of 2012, CO2 published Menage a Bughouse, the 400 page collection of my Bughouse comics. Bughouse covers the career of the all insect band of the same name as they rise through the ranks, bringing Be-Bop jazz to life at the end of the swing era. The lead character Jimmy Watts is the avatar of the new style with his sublime tenor saxophone work, but struggles for survival as he battles addiction to "bug juice."
Bughouse began as a series on my own Cat-Head Comics imprint before moving to Top Shelf for a trilogy of graphic novels. 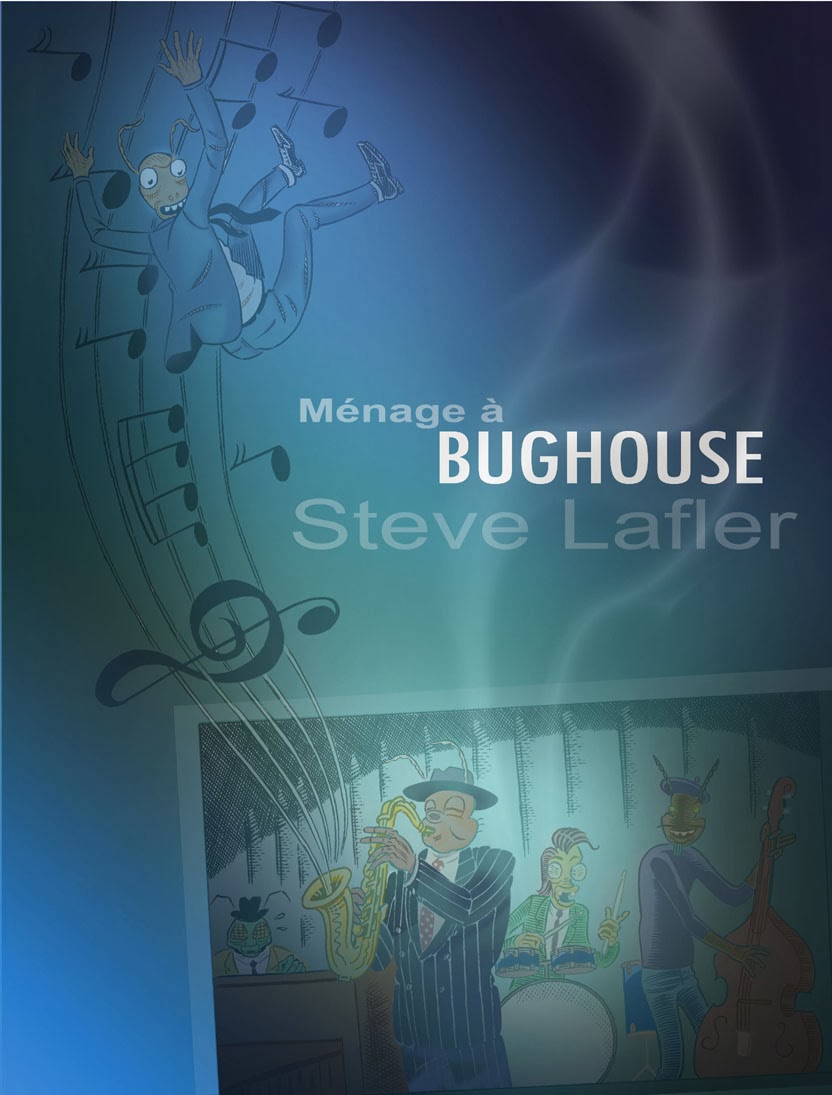 These two books promise an entertaining and unusual journey, delivering highlights from the fringe of three decades of alternative comics. No devotee of alternative and independent comics should miss these! 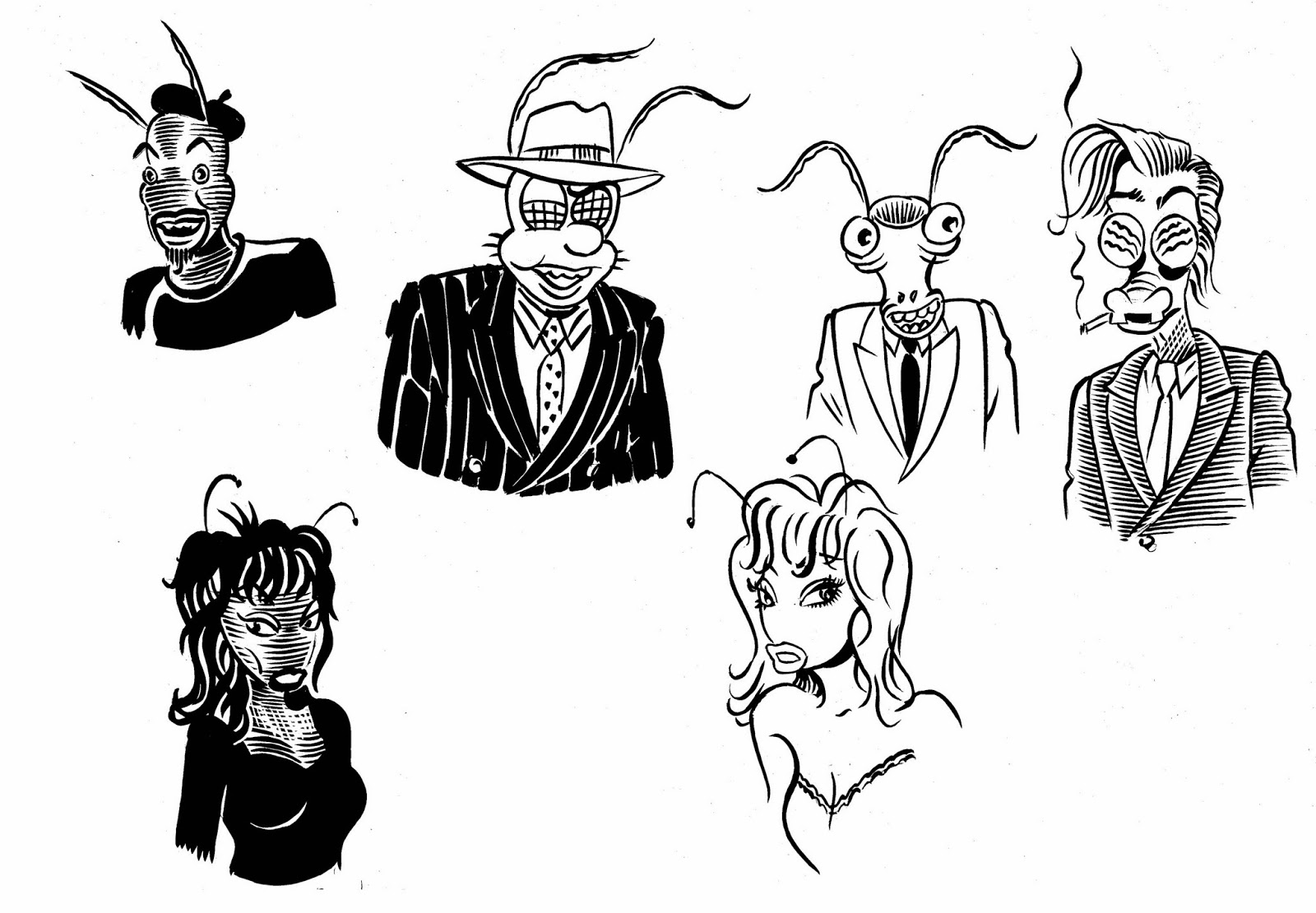 I've just updated my comics and T-Shirt catalog at his link.

I have a whole new line of really great shirts, including this: 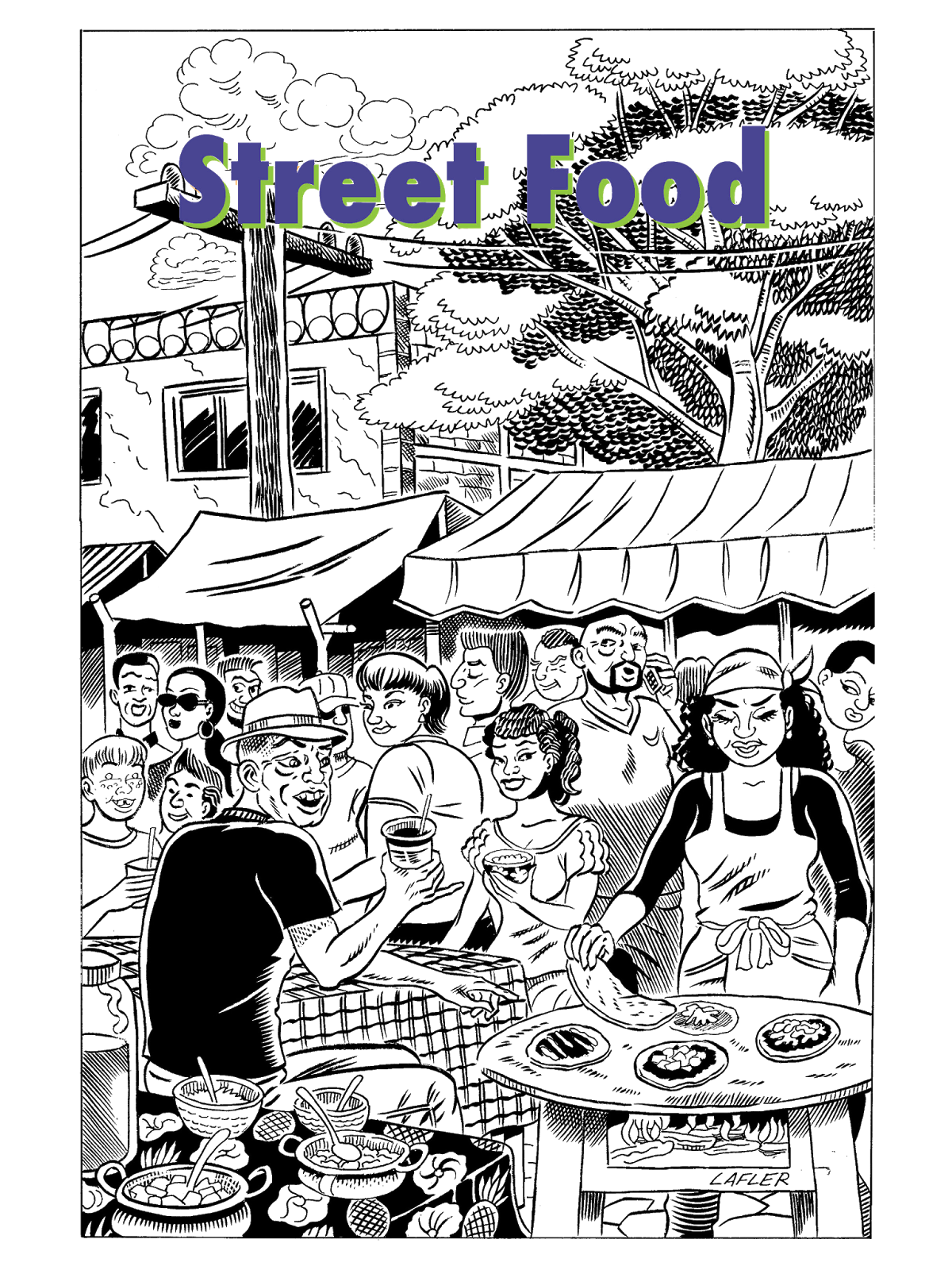 Drop on by and do some Holiday shopping, why don'tcha?

Cheers
Steve
Posted by Steve Lafler at 11:37 AM 1 comment:

A Night on the El Conjuro Terrace

By design, I'm a casual enthusiast of Mezcal, the distilled agave spirit at the center of Oaxacan culture. See, if I was a true devotee, I'd be in trouble. The best mezcal goes down too darn easy, smooth as silk with a bouquet of subtle flavors blossoming on the pallet. It's distilled in small batches in hundreds of country palenques (alembics?) by true artisans, each with their own ideas about how to pit-roast their agave and more. It's incredibly seductive stuff, created in an array of styles each with it's own signature taste, such as anejo, joven and tobalá.
. 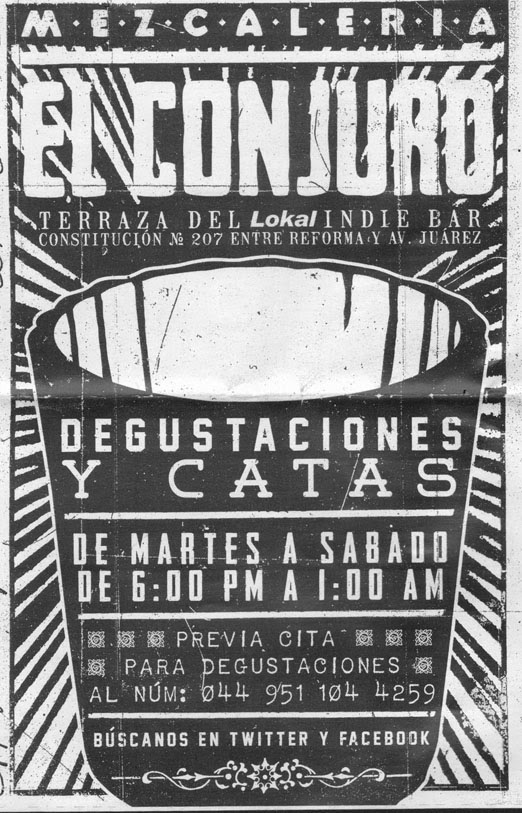 The complete mezcal experience involves visits to country stills with knowledgeable guides such as Oaxaca resident Alvin Starkman. You can chat with the mezcalero as you sample their wares, and pick up a few bottles of delicious, top grade stuff for a low price.

Recent years have seen an alternative tasting experience cropping up--the Oaxaca centro (city center) has seen a spate of cozy mezcal tasting rooms and bars opening up, serving top quality mezcals. I recently attended a Dia De Muertos craft fare and chatted with the guy at the El Conjuro mezcal booth. He gave me a taste of a smooth, potent "Joven" style mezcal, along with a flyer for the El Conjuro mezcaleria on the terrace of Lokal, a new bar at Constitucion 207 in Oaxaca Centro.

My friend Carrie was visiting for Dia De Muertos, a fellow cartoonist who enjoys a tasty mezcal. Last friday evening, we headed to Lokal for a taste before checking out the Muertos holiday Comparsa in the Jalatlaco neighborhood (a sort of roving costume performance/parade/party with a Muertos theme.) The entrance to Lokal is dramatically marked by a sculpture carved from a big dead tree stump on the sidewalk, executed in a cross between Oaxaca and Tiki style. You can't miss it! We tumble into the cozy interior and make our way up a steep stairway to the El Conjuro terrace. There is a little stage and seating on one side and a bar on the other. A great spot! Immediately I think, "My band should play here!" 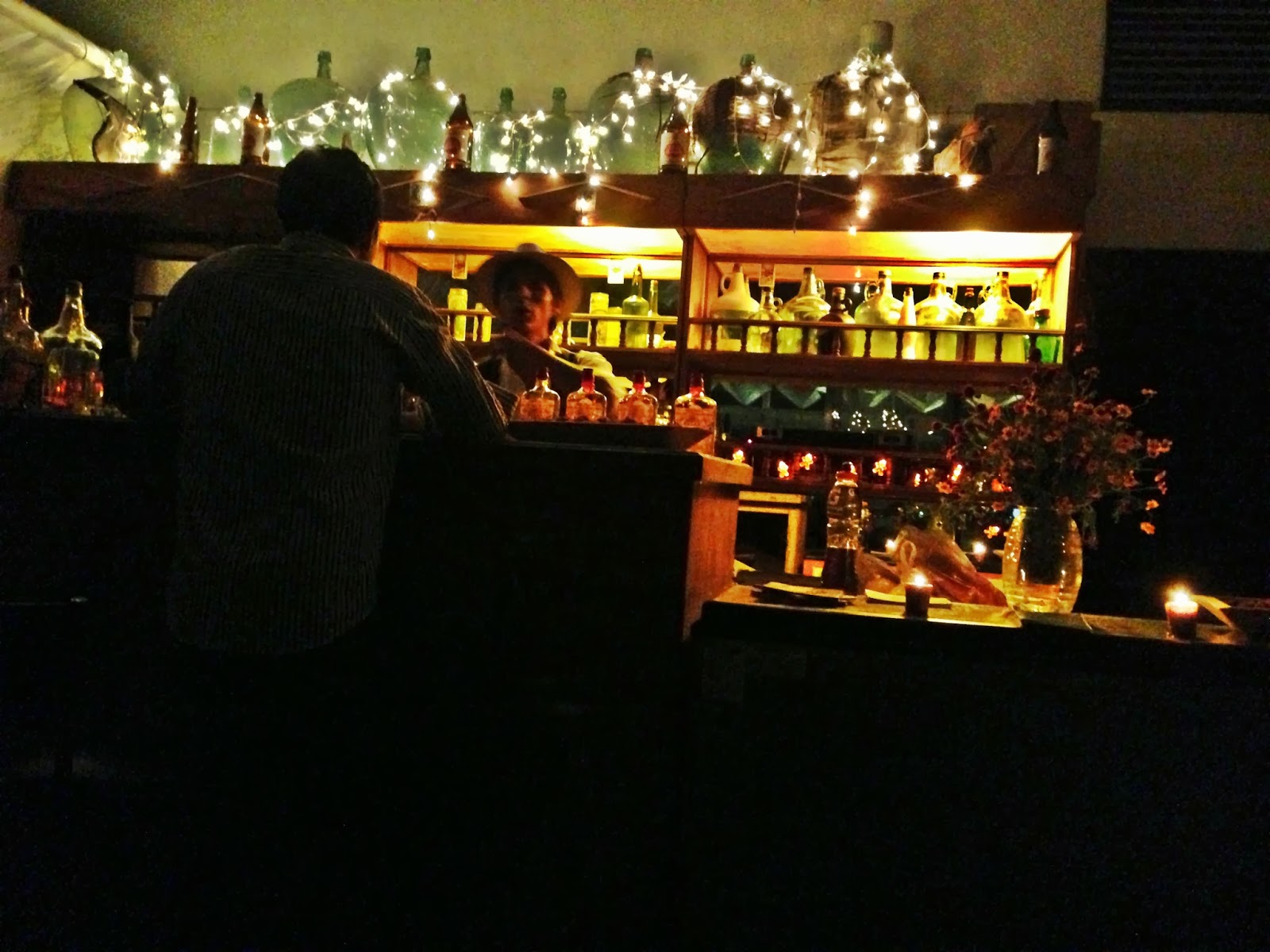 The barkeep Antonio greets us and he's the man, the El Conjuro expert. He explains the offerings to us, certainly too many artisan mezcals to sample in one visit! We taste a tobalá, a variety of mezcal made from wild agave. It's a generous pour for 35 pesos, not too shabby for something very unique and flavorful.

A trio of virtuoso musicians strike up a funky mix of Latin flavored R and B while we taste a couple more varieties, and they are even more delicious than the tobalá. Here is where I admit to being an amateur reporter, I did not write down the names of the other varieties. They were new to me; I'm not sure if they were obscure types of mezcal, or proprietary brand names created by the crafty El Conjuro marketing staff. 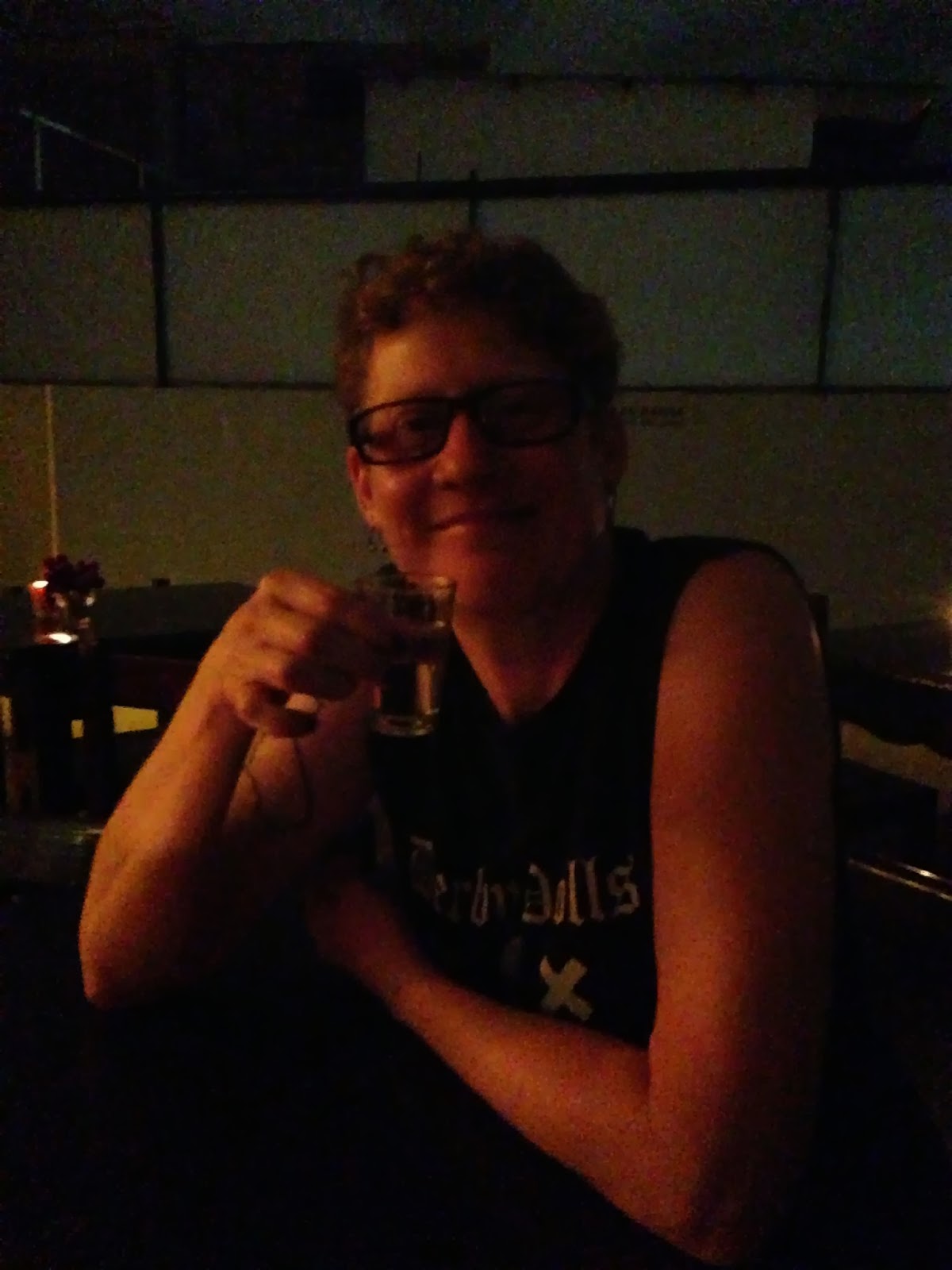 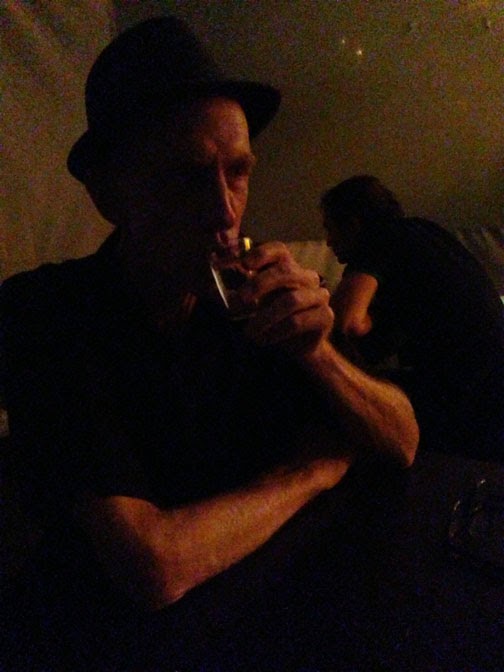 It's hard to describe their tastes. Carrie said it's like flowers. It is not perfumey however, it was more earthy than that. Suffice it to say, the art of the mezcalero was all there; the decisions in selecting and roasting the agave, the set up of the palenque (still) be it copper, clay or what-have-you, and the dozens of steps in their distilling process. It all adds up to a complicated, subtle mix of flavor and potent distilled spirits experience.

Reluctantly, we depart the El Conjuro terrace--after all, we don't want to miss the Jalatlaco Comparsa! And it's just as well, mezcal is delicious indeed, but it's a tricky buzz, floaty and mildly psychedelic. Fair to say a little bit goes a long way!
Posted by Steve Lafler at 9:52 AM No comments: