Your money is not my money—it might not even be money!

Money does not exist. It’s a con game, an agreed upon illusion, a convenient conceit to chart the flow of power in our lives.

Where does money come from? How is it created? What do we mean when we say we “make money” or “time is money” ? And what the heck is “cash flow”—is money a liquid?

When you work at your job, you are indeed “making money”; for all intents and purposes, you are introducing new cash into your life where it did not exist before. But what about a bank that creates a $20,000 dollar loan for a car. Is that “making money” ? Did that 20K exist before the bank granted the loan? What about when the federal government expands the money supply? What about when Bush spends another several billion on his military misadventures? Is that “making money” ? It is certainly creating money almost literally out of thin air, aided by the stroke of a pen.

People tend to see money as an absolute, a measurable unit of, uh, measure. See how quick we get into the quicksand when attempting to define what money is?

I am interested in how money functions in the life of the self-employed person. It’s different for the self-employed than it is for the job holder, who can expect a predictable amount of cash per week, month, and year. The employee can handily measure income against expense, set up a budget and earmark an amount for saving and investing. They can become obsessed with their “magic number” as per the dictums of Money magazine in their quest for a comfortable retirement (Just thinking about the “magic number” concept reminds me why I consider holding a job a LIVING DEATH, where you mark time until you retire, close shop and drink or whatever).

Certainly it behooves the self-employed (bohemian or otherwise) to have a firm grasp of their numbers. How much do you take in during a typical month, what are your expenses, and what do you need to cover your nut? As I stated when I began blogging, an entrepreneur can set up a simple book keeping system, taking deductions allowed on the Schedule C and meticulously recording their income and expenses on a regular basis (and do explore all those lovely tax forms that help you keep more of your money—don’t be afraid of them, they are your friends!). Keep on those books on a daily, or at least weekly basis. Nothing will paint a more literal and accurate picture of the financial soul of your business than your financial ledger.

Armed with this information, you are in a position to make decisions about what your next moves. Are your profits enough to live on? That’s not bad, but what frugal things can you do to attract more clients, or make more per transaction? Are your profits far in excess of what you need to live? Good time to expand—create and execute a new marketing plan, acquire new equipment, take on an employee. Are you getting the crap kicked out of you? Rethink the entire business model RIGHT NOW! Do you have peak cash flow months and slow cash flow months like my T Shirt business? Then salt away some green in the flush months for the lean months.

And isn’t that why someone becomes an entrepreneur, because they are passionate about the proposition of calling their own shots, nurturing their dreams into the real? Certainly the self-employed want to make a lot of money, but they are really in the business of manifesting their dreams. I’d argue that building the dream is the image in their mind’s eye first and foremost—the stack of cash is just a simple by product that naturally results when the fine tuned machine is hummin’ just right.

Posted by Steve Lafler at 8:36 PM No comments:

A Growing Boy Needs his Fun

I did not have a mid-life crisis when I turned forty, no, instead my gal Serena and I packed up our stuff and hauled off to Mexico for half a year. We traveled the country from the culture rich highlands to the fabulous beaches. I wrote and drew Jonk!, a graphic novella in my BugHouse saga. I picked up enough Spanish to get by. A very good time indeed was had by both of us.

To some, this will sound like the classic solution to the mid life crisis, running off on a grand adventure, but I was doing what I always did anyway: Writing and drawing comics. To say someone is having a mid-life crisis presupposes that they are desperate, melancholy, psychotic or otherwise in some dire straights. None of these conditions had befallen me at the moment of my fortieth birthday, I was a moderately happy camper getting a bit happier, a self realized individual continually following his bliss, as per the recommendations of the late Joseph Campbell.

Gotta admit things feel a bit different as my train pulls into the station marked FIFTY.

I still work for myself and I still create comics, both are fulfilling endeavors where I execute a portion of my dreams in real time. I have two children now and I love being a dad and all that implies. Serena and I are still a unit; I must have won the relationship lottery—all the ways our love has helped both of us grow into ourselves and each other has me convinced I’m the luckiest of men.

There are platitudes about middle age. One of them is “Life Begins at Forty”. It sort of did for me, I finally was in a great relationship. I finally figured out that bliss was not to be found at the bottom of a bottle of beer (let alone nine rapidly consumed beers). I found the success that comes to the self-employed by being too dogged to give up, give in or otherwise submit to the LIVING DEATH known as “a steady job”. Hell, I even bought real estate the moment before it got trendy, and I’m embarrassed to tell how well that worked out for me.

Another platitude about middle age is this: “Fifty is the New Forty”. Now what the fuck does that mean? It begs the question, what was the “Old Forty” like??? Did one walk to the mirror on their Fortieth birthday to see deep lines written in their slack face, the grim reaper peering over their shoulder? Or does it mean I am to try for eternal youth, deny middle age, and try to be young and fresh forever?

In my case, as I near the big birthday, here are some facts. Note that these are tied to ego, and youthful dreams.

When I graduated college in December ’79, more than anything I was burning to make comics. All day, every day, I was literally consumed with the mission to sling ink and publish at all costs. That is literally what I have done since, always staying true to my vision, making no compromise to the concerns of commercial publishing. While I am thrilled to have chosen this path, have made some decent money along the way, and have near 100,000 comics and graphic novels in print, the basic fact remains: It has been necessary to maintain my T Shirt printing business in order to make a living. This hurts a lot, and there is no way to pretend it doesn’t.

The running thing, hell, it’s an illustration of the survival of my adolescent ego. I still want to conquer the world with my strength, my brute enthusiasm for life, while manifesting the joy of movement. At Forty, the aging athlete can still put it together; think of Kareem, of Robert Parish in the NBA finals, of Eamon Coughlan breaking four minutes in the mile at age forty.

Nobody plays in the NBA finals at fifty! Nor do they run the mile under four minutes. Thus it is incumbent upon me to accept my diminished physical powers, my softer middle age corporeal personage.

Where do I go from here? Do I amend my youthful dreams? Run off to Mexico again? (Hey, that sounds pretty good!). I’ll answer with my own near platitudes. It is necessary to keep growing and keep learning. It is necessary be eternally curious, and to embrace new experience. I will fan the flames of new creative endeavors.

As far a the model of continuously pumping out comic books and graphic novels in hopes that I hit the zeitgeist or otherwise catch on, it’s simply time for a new model. I sustained the old one for a long time because it was fun. If I am having fun I am doing something right. I’ve always been a process oriented artist. The process of creating my Bughouse comics was insanely fun, and then some. I’m not possessed of that burning passion to create comics come hell or high water at present.

So I’m in search of fun. What will float my boat? What will work for me as an artist, an entrepreneur, a human being? I’ll be sure to report back on that. 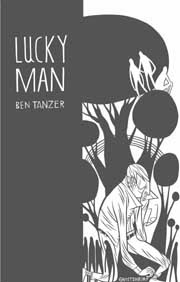 I am pleased to announce the publication of Lucky Man on my Manx Media imprint. Lucky Man is the debut novel by Chicago writer Ben Tanzer.

Ben has been a reliable purveyor of short stories and magazine pieces (he even profiled me for Punk Planet a couple years back!). Here he is with his heart wrenching coming of age story, focusing on a group of friends attempting to transition into adulthood. The book is harrowing and funny. It will resonate in particular with anyone who came of age in the Eighties.

I posted a Lucky Man page on the Manx Media site, but you can also go direct to Amazon and buy it there.

Mr. Tanzer and I will both be reading at Quimby's in Chicago on Wednesday, March 7th at 8 p.m., it should be a rollicking good time. We're working on some other appearances too and will post them when they are confirmed.

Benb For Dummies--Wait, Benb is a Dummy! 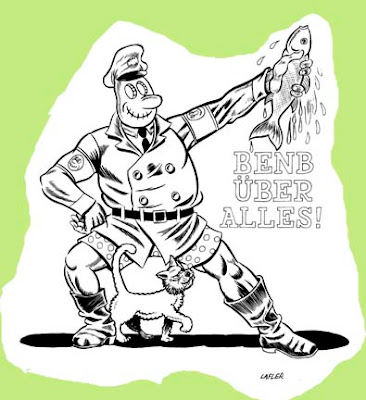 At the tender age of nineteen, a strange and unpredictable entity appeared on my dorm wall: Benb.
He appeared there by virtue of the black magic marker that my good friend Tim Robinson wielded in his paw; Tim and I were immersed in a cannabis-inspired fit of graphitti. The best I could do was "The messenger from C.A.K.E.", but Tim, off the cuff poet and all around inspired genius that he was, hit one out of the park and introduced Benb to me, and to the world.

I've bring this up because I've posted a BENB page on my stevelafler.net website, for those interested in more Benb-ness.
Posted by Steve Lafler at 9:13 PM 1 comment: