The Nature of Time

OR, Here We Are, Fine With Me (loudly, in a mildly threatening yet happy voice).

Pretty much my whole life, I've questioned the nature of time, as we all do to some degree. This little comix vignette illustrates some of my ideas on the subject.
The preceding three pages of comics are from a digest sized comic, CAT SUIT, which I put out three years ago. The story also appears in my graphic novela TRANNY that I published two years back.

Meanwhile, I've been wading through Daniel Pinchbecks heroic tome 2012: The Return of Quetzacoatl. Mr. Pinchbeck strongly puts forth the idea that the evolution of human beings depends on us developing a different idea of time, a different relationship with time. Couldn't agree more on that point.

Further he suggests that key to advancing is the adaptation of a new calendar based on cycles from days and seasons to the turning of the planets, solar system and galaxy. Fair enough, but some of the ideas in the book do not resonate with me, on the other hand.

Pinchbeck shares ideas and roles, to some degree, with the late Terence McKenna, but they are very different guys. Each has bonafides as a psychedelic guru, and the levity to admit that their pet theories might simply prove they are quite mad, but for my money McKenna does it with a charm and humor that's hard to beat.

I've taken on the task of communicating these ideas in my comics, interspersed with a range of characters, narrative and poop jokes. Like McKenna and Pinchbeck, I've always felt like a conscript in the army of transcendental truth and change. Like Ken Kesey said, "Ya can't quit da mob".

For me, the original insights and messages came in a flash, when I was a freshman at UMASS Amherst on April 10, 1976, but that is whole other story.

And just for the record, I don't have to admit to the possibility that I'm quite mad. I mean, c'mon, I a cartoonist!
Posted by Steve Lafler at 7:07 PM 1 comment:

What could be more fun than painting your favorite monsters shredding on some cool guitars?
Putting them on T-Shirts, natch!
I just put up these two T-Shirt designs on my Cafe Press storefront, so you all can get some styling Ts for the warm weather. 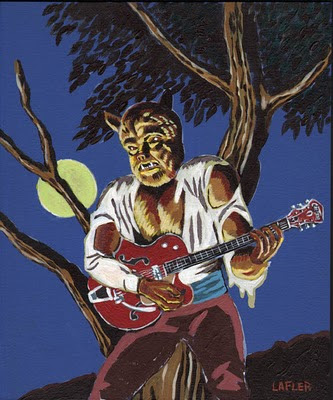 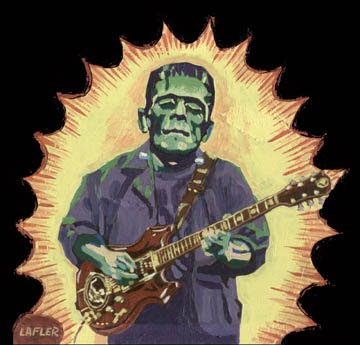 Posted by Steve Lafler at 11:38 AM No comments: 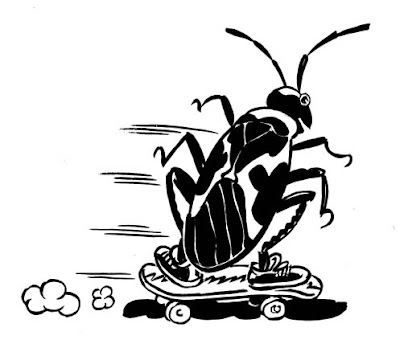 Been dabbling in Illustration a bit lately, looking to do more.
Here's the latest version of my online portfolio.

Above, milkbug on a skateboard for Sarah's Science. Am I crazy to think that this drawing is informed by my child hood delight in the art of Jack Kirby?
Posted by Steve Lafler at 10:28 AM No comments:

Start that T-Shirt Business This Afternoon

A guy named Russell just wrote for advice on starting a T-Shirt biz. Here's my reply. I hope it helps!

Sounds like you have some great ideas and could really make a go of a t-shirt biz.
If I was starting as you are, perhaps I'd get into screen printing, setting up a shirt shop, and creating a focused marketing program, pushing Tshirt printing to a targeted group of markets in your area -- restaurants, schools, service businesses, retailers, government and university/college markets. Try google adwords and monthly postcard mailings to a list of 1000 or more. Network and hand out your card, talking up your biz, etc.

The inkjet transfer is a winning idea. Get one of those Epson printiers that can handle an 11 x 17 sheet.

Embroidery is a lucrative market. At first, it would be better to send the embroidery jobs out to a shop in your area, or maybe one that sells on the web. You can take a good markup, I've done a lot of outsourcing embroidery.
Maybe get a machine later as you add staff.

Good luck -- if you want to succeed, and are willing to put everything you have on the line, from smarts, guts, determination, ingenuity and capital, you will.

STEVE
Posted by Steve Lafler at 8:30 AM No comments:

El Vocho is done, and it's posted here, on it's own blog.
I just posted the last page, seen here. Click on the art to see it bigger.
IT's also started running at CO2 in a more visually pleasing format.

I'm gonna do some edits on the book and begin the whole marketing & publishing process over the next few months.

The book won't be out for awhile, but you can visit my web store if you'd like to check out the El Vocho T-Shirt.

STEVE
Posted by Steve Lafler at 10:49 AM No comments: