40 Hour Man: The Afterlife of a Graphic Novel 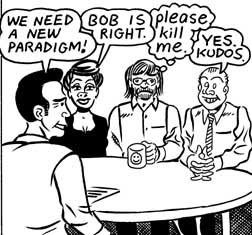 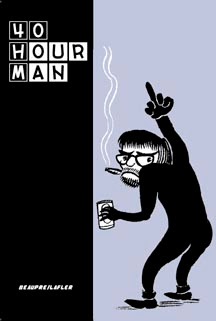 I'll start this post with the hard sell, my 2006 graphic novel 40 Hour Man (actually drawn by me, written by my genius buddy Stephen Beaupre), is available as a Print on Demand book for a bit under eleven bucks on Lulu. The link here will take you to the buy page. It is also available as a FREE download.
Here is a quick description of 40 Hour Man: Is it a career, or a series of really lame jobs? Stephen Beaupre (author) and Steve Lafler (cartoonist) pose this timeless question in Forty Hour Man, a hilarious saga of one working stiff's three-decade journey into the minimum wage heart of the American Dream. It's all here - from scrubbing a steakhouse floor with a toothbrush to going bust in the Internet boom. Every bad boss. Every crazy co-worker. All the more shocking because it's true!

The availability of this title via Lulu is the latest development in the life of a small press title in the post print era. I'll briefly outline the trajectory of it's distribution, it's an object lesson in the difficulty of being a print guy like me in the post print era.
First, I tried to get 40 Hour Man listed in the Diamond Comics catalog. Diamond said no, the book was "not visual enough". Strange, as every book I've put out since the mid 80s has been sold through Diamond. And, every graphic novel I've put out has exceeded Diamond's sales minimums. Go figure, but Diamond is trying to pare down the amount of stuff in the catalog, and is run by bean counters (this is the nicest thing I can say about the company as a whole, but I do appreciate how much of my output they have moved in the past).
I got a break of sorts when the book was well reviewed in Booklist, the American Library Association's review rag, and another when it was picked up by book trade distributor Biblio (a sort of junior varsity book trade distrib). This combo of breaks added up nicely, with 3 - 400 units moved, many to libraries. Through a variety of marketing ploys, I was able to move another couple hundred units.

Sadly, Biblio was not doing well and was bought out by Atlas Books, the distribution arm of vanity press printing giant Bookmasters. Bookmasters is the type of company that looks good on the surface to a small publisher, they can handle production, printing and distribution under one roof, and are well organized. However, they are not really in the book distribution business; they are really in the business of squeezing every damn cent they can out of the small publisher. I'd say they are corporate predators, looking to nickel and dime unsuspecting green publishers with odious charges for every thing they can think of. Their warehouse staff does not cut a fart without charging you 40 cents for every book you have warehoused with them. In short, Atlas/Bookmasters SUCKS.

OK, so I cut and run from being distributed by Atlas. So where does this leave a fine title like 40 Hour Man? Enter Lulu.com, a decent POD outfit. The Print on Demand field is getting crowded, and like Atlas, many of these firms charge high fees for services rendered. I like Lulu, as I can still make a buck and get a good quality book out there.
I like offering the free download, it just makes sense. Hell, the Grateful Dead let the tapers set up to record every show, and got rich and famous. With the print version of 40 Hour Man, I'm adding a $1.00 fee to production cost for me. Mr Beaupre and I both put a fair amount of coin into bringing this title to the public, maybe we can get enough back to buy ourselves a pizza some day!
Posted by Steve Lafler at 9:55 AM No comments: