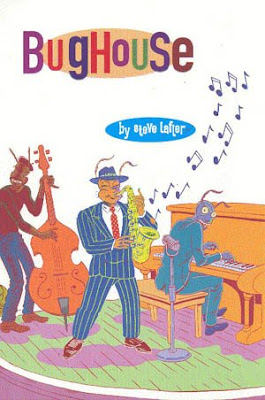 My best known graphic novel, Bughouse, has become available from Daedalus books for the incredibly low price of one buck. Bughouse was published in a variety of formats -- the strip first appeared in my long running comics anthology Buzzard. Feeling the groove with the material, I began publishing Bughouse as it's own comic book in '94 and it ran for six issues before I collected it all as a graphic novel in October '96, under my old Cat-Head Comics imprint. The burst of creative energy I hooked into with this material was downright thrilling.
Top Shelf partner and all around comics enthusiast Brett Warnock suggested an expanded edition, and they published it in the summer of 2000. Top Shelf went on to publish a trilogy of Bughouse titles with Baja in 2002 and Scalawag in 2005.
Rather than write a new description of the book, I'm gonna quote from the Daedalus blurb, as they got it right:

In this first novel from the Bughouse series, Jimmy Watts turns from a wiseacre Catholic school kid into a gifted saxophone player. He pulls together a band with his friend Slim, elopes with a sexy bug named Julie, and tries to find inspiration while going on and off the bug juice. Populating his graphic novel series with anthropomorphic insects, Steve Lafler tells the story of the jazz band Bughouse, playing in a Manhattanesque setting in the early 1950s. Junkie musicians, crooked cops, and double crosses are all part of this "insect noir" ensemble piece. Tenor saxophone maestro Jimmy Watts leads his talented band of bugs from the swing era into the uncharted maelstrom of Bop, looking for a new sound while fighting the temptation to be consumed by addiction to a substance known as bug juice. "I love Bughouse. I'm fond of the little bug-creatures that inhabit it," said Phoebe Gloeckner, creator of A Child's Life. "Steve Laffner has created an alternate universe. His insect characters are not particularly cute (well, some of them are), but one can easily empathize with their meaty human struggles with addiction, ambition, love, power, greed, and lust."

Okay, so they spelled my name wrong in there, I must admit to getting a kick out of that.
In any case, this here is a chance to pick up my signature book for nothing. I'll admit that it does not please me that the book has suffered such an ignoble fate, but it's just not something to take personally.
Top Shelf publishes a lot of stuff, and has the resources to promote only a small fraction of the titles they publish. The book biz itself is facing what some call "The death of print", so it's a tough market and has been for awhile, even with all the talk of the graphic novel being the dynamic growth genre. Certainly Top Shelf put forth good faith efforts to sell my book, it's just that the serious promo was reserved for the Craig Thompson, Jeffrey Brown, James Kolchaka and Alan Moore books.
My contract with Top Shelf actually expires this June. It was a pleasure to work with these guys and put out a trilogy of books. However, come June, I am free to market and package my Bughouse material anew as I see fit. I'll be sure to blab about any Bughouse developments here in this blog as they happen.
Posted by Steve Lafler at 7:40 AM

So I mentioned Bughouse on Daedalus, and one friend points out that Daedalus carries only "A list" books. So I am officially pleased about BugHouse being available there.

Oops, I meant to add that I'd mentioned it on my Facebook page. That will show me, I better remember to preview my damn comments.

where can I purchase a copy of Scalawag? I've seen a copy or two on eBay, but I'd rather the money go directly to the creator.

Wow, thanks! But go ahead and buy Scalawag online, as I live in Oaxaca it's not practical for me to send out copies.
Top Shelf, the publisher, may still have some, I get a royalty if you buy from them.