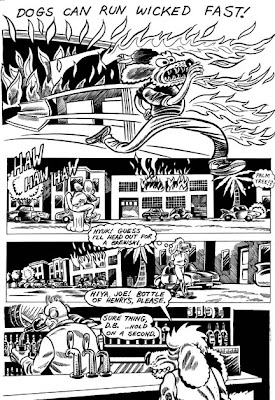 I recently posted a slew of my Dog Boy comic book covers on this blog.

To recap, I introduced Dog Boy in Guts #3 in the summer of 1982 (Dog Boy's first actual appearance was on a "publishing party" poster for my Benb & Gerald book in March 1980 -- the band was Martian Highway, and the guitarist Carl Mayfield and I collaborated on the poster. We printed in silver ink on black paper, so that it would look like an 11" x 17" hit of blotter acid).

Dog Boy #1 (Special Shoe Issue) appeared in March '83, and I went on to publish seven issues under my Cat-Head Comics imprint. Fantagraphics stepped in and published another ten issues, starting up with Dog Boy #1 (volume 2).

Certainly I will produce a collection of Dog Boy material at some point. There's somewhere in the neighborhood of 400 pages of material, I envision a 200 - 300 page volume, culling the best stuff into one killer package. Not sure when this will happen at present, except to say it's a good bet it won't be in 2007.

As I am frankly too busy to run a back issue catalog business, I've placed over 1000 copies of Dog Boy and Bughouse comic magazines with Cosmic Monkey.

I'm giving myself the job of staying focused on my current comics work. As the dad of two small children, I have been by necessity neglectful of entering into my full-on comics creating trance for the past several years. I'm ready again to turn the light inward to see what strange fish I might haul back to the surface world for presentation to the public!
Posted by Steve Lafler at 8:44 PM