Is Print Dead? Or Does it Just Smell Funny? 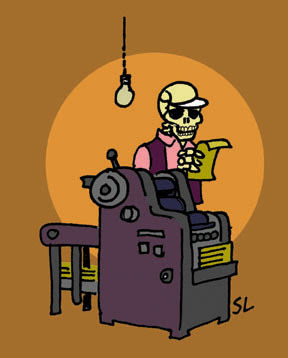 If you are like me, you have a lifelong love affair with print in all it's manifestations—books, magazines, newspapers, graphic novels, comics books, posters, drink coasters—in short, anything you can feed through a press and slap some ink on can be the object of this affection.

With the rise of the web and “new” media, newspapers and magazines are shrinking from reduced ad revenues and circulation. The venerable Punk Planet has folded, publishers of every stripe struggle to break even, and kids spend the majority of their reading time online, instant messaging and the like.

Sure, electronic media is stunning and fun, but a deep-seated part of me wants to bury my head in the sand and focus exclusively on print, for ever and ever.

I felt compelled to poll several of my colleagues in the ink stained world of comic books and graphic novels on the state of print today.

Jesse Reklaw, the cartoonist behind the weekly strip Slow Wave, is a keystone personality in the vibrant world of mini-comics. “I think about this all the time lately. My feeling is that things are shrinking in some ways (newspapers, magazines), but growing in others (graphic novels, printed archives). Maybe we're readjusting and getting better focus about WHAT should be in print...it is one of the most durable forms of information storage.”

“I don't believe print is dead. I've actually had a lot of time spent thinking about what I'm trying to do with my life and the whole idea of punk rock is something I keep on coming back to. I've been a punk since I was a kid and those values are really my core values. If you feel bad about stuff the only thing we can do is fight it. I love print, love drawing, and love art comics. I hate what comics became in the 90s, things like web comics, ‘the new independents’ and all the money-speak that took over comics bugs me. I'm an underground kid and that is my idea. I think, all we can do is light our little fires and stoke them. I don't ever feel like giving up.”

Sparkplug has issued outstanding titles by the likes of Mats!? (Asiaddict), Renee French (Edison Steelhead's Lost Portfolio), the gifted young artist Austin English (Windy Corner), and Williams’ own standout series Reporter, to name a few. Both Williams and Jesse Reklaw are in the vanguard of comics kids coming to full maturity—these are people who have vision, ambition and confidence. They believe in print and are willing to bet their careers on it.

Veteran underground cartoonist and painter supreme Mary Fleener offers a historical perspective on how we got to where we are. “I think the print world began to die with the television. When radio was king, books were still popular because radio didn't have the visual kick. Don't forget, we humans are a lot like magpies—we like shiny things and TV provides that fix. However, today, print and TV are dying because there's nothing of substance on either TV or within newspapers.”

Rob Clough, comics editor of Other magazine and a high profile comics critic, joins Fleener in naming TV as the real culprit in the waning primacy of print, but holds out hope for the graphic novel.

“Print as the dominant form of mass media is dying. That was precipitated by TV and is obviously being driven further home by the Internet and assorted gadgets.

“That said, reading print is such a particular and visceral experience, that print will never completely go away. Instead, it's going to become more of a boutique item, something done in smaller quantities. It's why Fantagraphics will continue to thrive, and why print-on-demand services like Lulu will become even more prominent.”

“The good news about recent technology is that it will democratize the dissemination of information
even further—everyone will have a chance to have their say. This will take the flow of information out of the hands of the corporate interests that have strangled it for nearly 150 years in this country.”

Looking to the future, I return to Jesse Reklaw, with his finger on the pulse of grassroots/DIY comics publishing. Jesse believes that the heart and soul, the true innovation in comics, rests in that grassroots/DIY world, and how can anyone deny that self-evident truth? He cites the emergence of several annual awards for mini-comics as symbolic of the durability of print based comics:

“The minicomics awards (this year we're offering a cash prize of $300 to the best mini!). I think the fact that people are rewarding mini-comics makers, and encouraging them, shows that there will always be an interest in print and the art of making books.”

For my own part, I'm inclined to agree with the sentiments expressed by Brett Warnock, co-publisher of Top Shelf Productions and one of the most charismatic figures in the art comics movement, “You know how I feel about print vs. digital media... I'll die with ink-stained fingers and a rolled-up comic book in my back pocket, baby!”

NOTE: Here is an interesting twist--I've been plunging into the world of Web Comics lately with my Tuff Toddler strip. The issue of print vs. "new media" remains foremost in my mind. Indeed, I have a couple comic book projects in the can, so I'm hardly ditching print media. Each project has a publisher interested, but I have no signed contracts for either as of this writing.

So it is that I wonder, are the existing revenue models for print media still viable? I've seen my income from print related projects shrink over the past couple years. How are these traditional models working for others?

The real question here, what are the revenue models (let alone the production models) for the "new media"? Sure, I'm pulling some modest income from AdSense ads from Google, but how is a cartoonist going to pull a living from the "new media"?

I'll be sure to post more about this. This article may or may not appear in an upcoming issue of Alarm magazine, I'll be sure to note if & when it appears.

Hey, I added your blog some time ago, but haven't ever commented.

I just quit my job at a local newspaper and am going in for my last week next week. I worked there for a year and a half right out of college.

Having been inside the paper, I can tell you it is dying a slow death. Circulation is down 15,000 from 20 years ago and when people quit or are fired they are not replaced, someone else is trained to do their job. All in an effort to save money.

The classifieds section has shrunk down and it's a struggle for them to make money. As a result, my salary was miserably low, our computers were from 1995 and ran Windows 95 and the only thing we were given were notepads. I even had to purchase my own professional quality camera for the job!

By my estimations, the paper will not exist in ten years, nor will most local papers. I think there will be a few national papers, like the LA and New York Times and all other news will be online.

The younger generation not only reads their news online now (I'm 25, but believe it or not, am not part of the younger generation, just a few years ahead of it) but they simply do not care about stories of local interest. So local papers are as good as gone.

As for other media like comics and graphic novels, I think it will be fine as well drawn, lengthy graphic novels almost require print. Online they lose their entire purpose.

I like print newspapers myself, but from what I've seen, they are as good as dead. Even my state's big paper, The Providence Journal (From Rhode Island) is cutting back and having reporters cover multiple towns and topics instead of hiring needed staff.

Yup, the classifieds used to be a cash cow for newspapers, now we have craigslist and google.
I briefly worked for the S.F. Bay Guardian 20 years back, they were giddy with how much they made on the thick classifieds section. That's a thing of the past, what do you do when your cash cow dies? Most papers will indeed fold.

I'm caught in both worlds. I work in a small paper, The Wenatchee World, which has it much better than many paper due to it's geographical location (only source of LOCAL news). However, they've seen the writing on the wall and are going great guns to get a viable web version running.

I also printed a few indy book in the 90's and getting readership was like pulling teeth. Now, I do an online comic and my readership is like 25,000 people worldwide. However, the comic is free, supported by advertising. Definitely not enought to live on now, but in the future. (In full discloser, I also POD print stories for those who prefer their paper fix)

Clint, it sounds like you are rather happily caught in both worlds, and you are well positioned to build on your web comic success.

cool blog I'll give it a vote,
in return check out

Here you can sell and buy both new and used products.
This website is perfect for selling just about anything at all.
More at www.postallads4free.com