The Funkiest White Man who Ever Lived 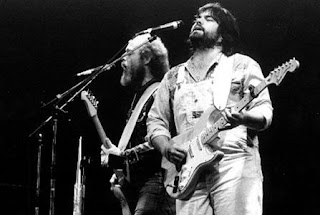 To move to a new house, a new city, a new country is to open a door on a moment filled with portent--rarely in life is there such a clean divide between the old and new.
When I schlepped several pick-up truckloads of stuff into our new place in San Felipe Del Agua, a neighborhood in Oaxaca city, last Friday, I was aware of this, but frankly was too tired from the effort to fully appreciate it.
It is a cozy, welcoming and very Mexican casa; Serena and I were pleased as could be to lease it, as a try at an earlier rental had collapsed in negotiations that underscored our lack of finesse in the protocols of Mexican business. Hell, it was a blessing in disguise, as the house we took was far warmer, a better vibe.

Popping open a first symbolic box at the conclusion of unloading, I spied a CD of a Little Feat studio session from '74, and popped it in. Suddenly, here is Lowell George at the peak of his powers putting a groove in my step with an insanely funky reading of "Rock and Roll Doctor". Lowell's rich, distinctive take on the Howlin' Wolf vocal style has room to shake in this number, and his Delta slide meets L.A. guitar leads are smokin'. Bill Payne on piano, Kenny Gradney on bass, Sam Clayton on congas, Paul Barriere on rhythm guitar and Richy Hayward on drums are unmatched in distilling the essence of New Orleans into pristine yet supremely butt-shakin' rock 'n roll.

Goddamnit Lowell, thanks for welcoming me into my new house! You are indeed the funkiest white man who ever lived.
Posted by Steve Lafler at 7:32 PM

When I lived in Philadelphia 73-76, I was able to see Little Feet two or three times at a smallish club. He did play that thang.

If you have some skills and looking for job, there are a number of options open to you. Due to tremendous growth in advertisement industry job seekers have waste options like newspaper, online job websites and recruitment agencies to find their desired job.
Recruitment agencies are one of the best options from this list. These Placement Agencies are an effectual way to find a job, and for employers to fill worker positions. A professional placement agency will often be approached by big firms looking to fill the vacant positions, so, if you are looking for a job, the easiest way to find job is through recruitment agencies. For more info visit http://www.quadgconsulting.com