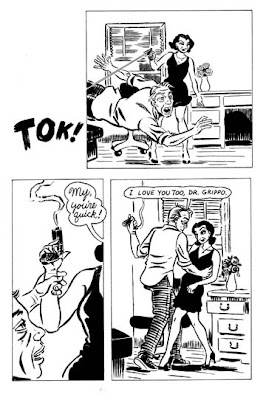 In Cat Suit, cartoonist Lafler takes on the super hero myth for the first time in an Alternative/underground comics career that has seen the Dog Boy comic book series, Buzzard comics anthology, the Bughouse graphic novel trilogy and the recent 40 Hour Man.
Lafler asks, what kind of whack job would put on a skin-tight suit and head out into the city after midnight? What pathology, what perverse proclivity are we dealing with here? Is he fighting crime? Hell no, he’s just going clubbing—and he’s frankly perplexed when the bar flies & drunks want to pick a fight with him.

The guy is question is Manx, a costumed cat man. He can't figure it all out, so he goes to Dr. Grippo, a sultry lady shrink from Eastern Europe (a divorcee, she has a crush on Manx!)All heck breaks loose when Manx reveals to Dr. Grippo that he has fallen for Delia, a hottie he picks up on one of his late night excursions.

Lucky Man follows four friends from their final days of high school through their first couple of years out of college.
It is a story about friendship, growing-up and trying to move on. Interwoven throughout are explorations into dreams, the Twilight Zone, and The Greatest American Hero. There are drugs, road trips, breakdowns, violence, and adultery.

Tanzer and Lafler will be on hand to sign books after the reading.