The Monster of Rock 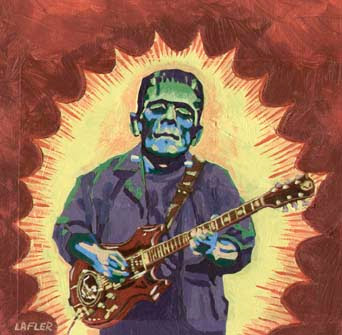 “I’ve loved string instruments ever since that hermit in the woods played his violin for me” quipped Frank, as the monster prefers to be called.

When this reporter mentioned that the encounter with the hermit ended badly, Frank quickly changed the subject. “I’ve been in love with “Tiger” ever since I saw the Dead in Oakland one Halloween back in the day—so I jumped at the chance to bid on it.”

The monster is currently in rehearsal with his new band “Frankenjerry”, which includes Wolfman on drums and Vampirella on bass. The Creature from the Black Lagoon has been mentioned as a possible keyboard player. No tour dates have been announced yet.