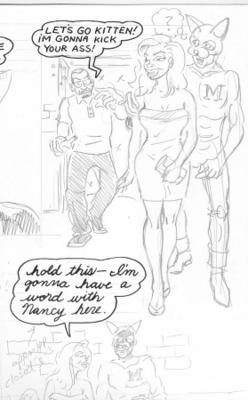 The big news from me on the comics front is that I am done with Bughouse. I've published three "Bughouse" graphic novels with Top Shelf; I've mined a very rich vein of material, and now it's done!
So, after recharging my creative batteries, I have begun drawing and writing a new body of work. It features a tongue in cheek character called Manx, a guy who goes clubbing in a cat suit! Manx is not a superhero so much as an explorer of the nether regions of human consciousness.
In the tradition of fictional work by such writers as Henry Miller and Paul Theroux, this character's alter ego is named after the author (that's me!). So, when Manx is not prowling the night in his cat suit, he is actually Steve Lafler! This will confuse some as they will indeed see it as straight up autobio, which I assure you in advance, it is not!

I just started working on this material, so with any luck, and some hard work, I'll have something in print by summer 2006. We shall see!
Meanwhile, anyone who wishes to pick up a copy of Bughouse, Baja or Scalawag (my existing graphic novels) can do so by visiting http://www.stevelafler.net
Posted by Steve Lafler at 12:35 PM