Kim Thompson Was a Great Guy in My Book

I've been thinking about Fantagraphics co-founder Kim Thompson on the 2nd anniversary of his untimely death.

I was never close to Kim, but we had a friendly acquaintance and mutual respect. He made a difference in my life, indeed he help me quite a bit as I was struggling to make it as a cartoonist.

By December of '85, I'd already published six issues of my seminal indy comics title Dog Boy under my Cat-Head Comics imprint, but I was hungry for a bigger audience. I submitted a huge batch of pages to Fantagraphics, and Gary Groth wrote back with a thumbs up. I was delighted! Gary wrote that Dog Boy was more up Kim's alley than his, so I'd be working with Kim. 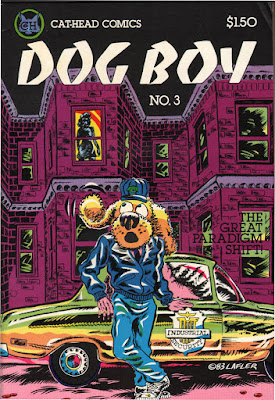 Via the mails, Kim and I went back & forth for a few months, discussing the particulars, but nothing really happened, and I was getting frustrated. I published Dog Boy #7 under Cat-Head, and hoped I could still work with Kim and Gary.

Fast forward to the San Diego Comic-Con, summer 1986. I haunted the Fanta booth looking for Kim. Jaime and Gilbert were in the house, but I froze up and was too shy to go over. Dork! Finally, I cornered Kim at the booth, and showed him 46 finished pages, about two-and-a-half comic books worth of Dog Boy. A great conversation ensued, and Kim said, "This is publishable work". We agreed he'd send a contract for me to look over, and I was over the moon.

Later that evening, I was hanging with a bunch of ne'er-do-well cartoonists by some hotel pool. Dori Seda had the world's tiniest bathing suit, and she was saying to her boyfriend Don Donahue, "I'm a very bad girl" and she jumped in. That looks like fun! Knowing I had on brand new black bikini briefs, I peeled my clothes off and in I went.

After the swim, I noticed Gary Groth and Carol Lay by the pool too -- Carol was up to the same as I that summer, inking up a deal with Fanta. Gary and I chatted, and he confirmed that I'd talked with Kim. I was happy as a clam.

Working with Kim, I did ten comic books with Fanta, and some work for his title Critters at a nice page rate. Kim was a straight shooter, no bullshit. Quietly enthusiastic, a real pro and very knowledgeable. And, I will say that the checks arrived in good time, with honest reporting on sales. Believe me, that is appreciated in the funky world of indy/alternative comics. 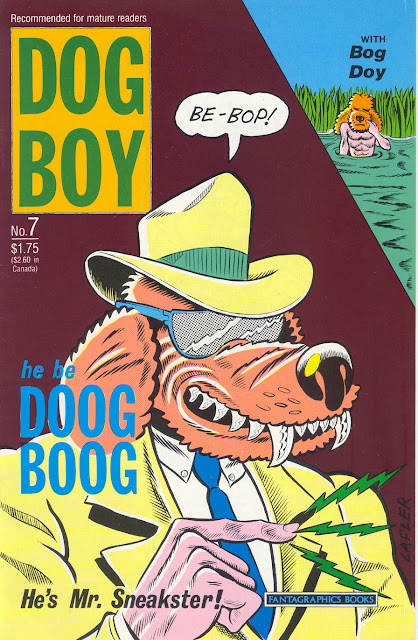 Did I mention this all happened in a brief window in the 80s referred to as the "black & white boom"? Well, the boom went to bust. Kim called one day, somber. He asked if I was still freelancing for other clients. "Sure", I said. Always have a few sticks in the fire. Turns out my sales of 10,500 for our first issue were down to about 2800 by issue #5. Ouch! So it goes.

Later, I mighta pissed off Kim a bit when my anthology title Buzzard ran a parody of the Comics Journal in Buzzard #6 in 1992. But I'll tell you, the piece, entitled "The Comics Urinal", was in truth an homage, a love letter to Kim and Gary.
Posted by Steve Lafler at 9:09 PM