The Road to Yagul 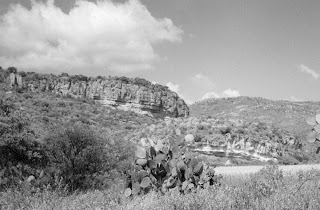 One fine hot summer afternoon in 1997, I found myself walking up the road to the ancient city of Yagul with Serena and Jenny. Yagul is one of the lesser known ruins in the Valley of Oaxaca in southern Mexico, less famous than the spectacular mountaintop ancient city of Monte Alban, or the mysterious palace at Mitla with its trippy geometric designs. No slouch of a ruin itself, Yagul boasts some super cool, creepy tombs you can climb down into. There’s also a virtual warren of multi-room buildings and the second largest ball court in all of Mesoamerica (after Chichen Itza).

As impressive as Yagul itself is, I really got a spooky thrill walking the road to the site. About a half-mile off the road on the right side, there were massive stone cliffs that appeared to be carved with some sort of art or hieroglyphs. I did a double take. Were we talking about some amazing natural rock formations? Or did the ancients of Yagul do this as their summer art project over the course of several decades? I don’t know! I took a picture of the cliffs, reproduced here, but it can’t do justice to what I saw.

That afternoon was one of those gorgeous deep blue sky days where every rock and cactus appears in super real, crystalline detail. A few billowy clouds gave depth and a timeless surreal quality to the sky. I gazed at the cliffs and a wash of impressions rolled over me. In the late afternoon sun they glowed with a sublime rosy orange presence. The sun was still high enough that the shadows were not deep, yet the forms stood out in hyper real relief. The jaunty presence of the rock, the color, the impact of their craggy statement, the actual fact of their existence in the immediate moment was overwhelming. I wondered if they were meant to be seen from a great distance, perhaps from the sky. Even as I was sure they were deliberately carved, part of me puzzled over whether they were natural formations. Deep in my skull, one voice assured me they were indeed shaped on purpose, only not by humans. What??? I snapped out of it! Take a picture, ya big dummy, we’ll figure it out later.

Checking my handy Lonely Planet guidebook, I see Yagul was built after A.D. 750, when nearby Monte Alban was on the decline. The book doesn’t have one word about my spectacular mystery rocks. In his book Oaxaca Journal, pop science writer Oliver Sacks mentions the rocks. He sees “…a cliff face with a huge pictograph painted in white over a red background, an abstract design, and above it a giant stick figure, a man. It looks remarkably fresh, almost new—who would guess it was a thousand years old? I wonder what the image means: Was it an icon, a religious symbol of some kind? A warning to evil spirits, or invaders, to keep away? A giant road sign perhaps, to orient travelers on their way to Yagul? Or a pure, for the love of it Pictographic doodle, a prehistoric piece of graffiti?”

I’m wicked happy that ol’ Oliver took the time to note this amazing piece of real estate, because I haven’t seen it mentioned elsewhere. I’m trying to remember the white paint over the red background part—I mostly recall the rock formations. But reading over his comments, I do remember part of my initial shock upon seeing the cliff pictograph: I had the distinct impression that I was already intimately familiar with it. It was almost as if I had done it myself! This was not a déjà vu, more like that feeling an artist gets when they are really pleased with a painting or drawing they have executed; they own it in their heart, they see it as no other possibly can because it belongs to them.