The Direct Market is Such A Bore. 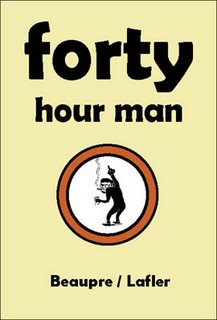 Anyone out there in the indie/alt comic book business? I've been in the game since '81. Seen my share of ups and downs in the so-called direct market, where publishers sell to specialty comic book distributors and stores.

To say it's an ingrown turd of a market is to belabor the obvoius. It's just boring and no fun. Mostly the same old-same old pointed at a peculiar smallish sub market. What passes for "cool" is so often lame, mainstream and shallow. Yeah, the kind of stuff I thought was cool too when I was fourteen years old!

The market's only saving grace is that a relative few great artists can survive and thrive with at least part of their career parked there. I'm thinking anyone from Dan Clowes to Joe Sacco to Phoebe Gloeckner, stick your favorite half decent cartoonist's name here.

For my own part, I've had comic books and graphic novels move through the "direct market" with varying degrees of sales and notoriety. I freely admit to feeling sour about the lack of sales for my trilogy of BugHouse graphic novels from Top Shelf. Certainly I'm not alone among artists with (intact) self esteem who, having put their works into this market, are disappointed with sales figures.

Okay Mr. Sour Goddamn Grapes, what's to be done??? You got a better idea? What do you propose?

First, no need to burn your bridges. Keep a toe in the direct market wading pool with future publications.
That being said, pretend that the aforementioned specialty market doesn't exist. Cool! This calls for a plan. In fact, how about a complete manifesto? Why not!

1. Art should challenge received notions held by the public, in particular strictly defined elites, styles or cliques within the medium/discipline that the artist is working in.

3. The public face, delivery and media notion of a work of art, be it object or performance, is recognized as part of the art itself.

4. The conceptual (business) model of the artists engagement with the world, through business activities such as publishing, gallery shows, public performance and such should be subjected to the same creative process as the actual art itself.
4.5. The artist shall engage in keeping accurate accounts of their income and expenses. Also known as "basic accounting".

Tips & clues--If the preceding appears opaque, oblique or prosaic to you, try the following:

A) Divest yourself of any beliefs or assumptions about the nature of reality.
B) Turn off your internal dialog.
C) Be.

Got that? Good. Now read the Manx Manifesto again. Better yet, don't. Just stick to the tips & clues.

I'm publishing now under the imprint Manx Media, and will proceed in tune with my manifesto.

Manx will release Forty Hour Man in July 2006. Stephen Beaupre wrote it and I drew it. This volume collects the strip that ran in Buzzard comics anthology over 13 issues, with 24 new pages, the perfect book for anyone who has ever had a shitty job--hey, that's pretty much everyone!
It will be a 272 page trade paperback retailing for $16.99. ISBN 0-9769690-0-9

Also next summer, Manx will release (you guessed it) Manx #1, the first issue of my new comic book. Should be about 50 saddle stitched pages, perhaps with a screen printed cover. It's gonna be a fucking art object. It's written and almost half drawn. No need to talk too much now about this one, suffice to say there will be a tour and it will be wild.

Steve Lafler
http://www.stevelafler.net
Posted by Steve Lafler at 11:08 AM

Hi. I just wanted to let you know that I bought your Bughouse books and I will definitely pick up Forty-Hour Man and Manx #1. I'm looking forward to them already. Any chance of getting more of you older work in print?

I have a lot of the Dog Boy and Buzzard comics in stock. This winter I hope to scan those suckers and put them up for sale on www.stevelafler.net
Another task waiting to get done!