A High-Low Look at my Comix Work

At this point it's fair the say that Rob Clough is the foremost writer on art comics. Under that general term, I group comics that are produced for the love of the medium, using it as a means of artistic expression (as opposed to a commercial genre vehicle.) Mr. Clough maintains his own on comics, High-Low, and also writes for the the Comics Journal.

Not only is Rob prolific, but he is enthusiastic, with a stunning, over-arching intellectual and intuitive command of his field. He is not only familiar with a huge body of books and artists, he diligently tracks new and emerging talent. He has the smarts to connect the dots and make articulate assessments of how a book works (or not) on it's own terms, but he also places it within the ongoing world of comics in particular and overall culture in general.

I was happily surprised this week to check in on Rob's comics review blog high-low to find reprinted reviews of my work in his ongoing Sequart Reprints series. Here are links:

Reviews of Tranny and 40 Hour Man

Rob closes his review of Bughouse,  my signature graphic novel series, asking if I will ever portray the main character, Jimmy Watts, as a mature adult who has worked through his demons. Could be, but in the meanwhile I offer this classic Scott Hoover photo of me from the early 90s. Why did I write about addiction in Bughouse? This photo offers a clue. 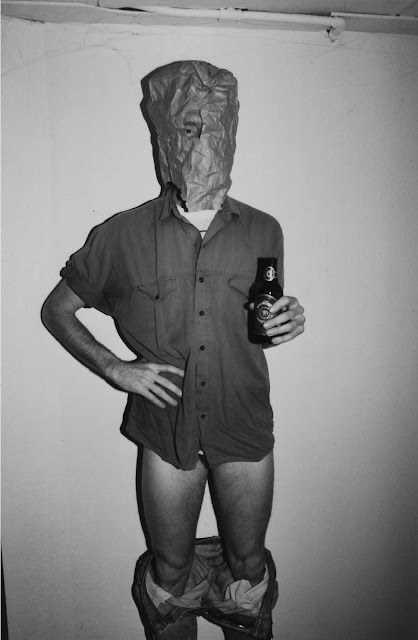 In all fairness, I should mention that I consider Rob a friend. He does like my work! We've only met in person a few times at SPX, but we are in semi-regular contact to our mutual enjoyment.

Finally, time for the brazen sales effort! Here is a link to the current Steve Lafler graphic novel catalog.