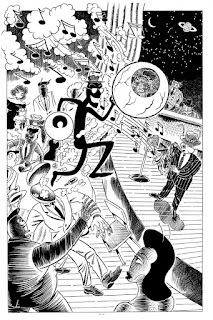 Lafler puts the creative life and the pitfalls of addiction under the microscope in this tour-de-force collection, tossing his name into the hat for contention as the Great American Cartoonist.

“I was inspired by The Autobiography of Miles Davis as well as the movie adaptation of William Burroughs Naked Lunch” quips Lafler. “The post-war Be-bop jazz and Beat literature scenes of New York called to me as an apt setting for an extended work”.

Critic Rob Clough named Bughouse to his top 100 graphic novels of the first decade of the new century at number 22.

The event is July 14 at 8:00 p.m. Locust Moon Comics and Movies, 4040 Locust Street, Philadelphia, PA 19104. Lafler will sign books & art, and perform a short set of Oaxacabilly music, a blend of country-punk and hysterical hillbilly cacophony.

“Steve Lafler is a master cartoonist and his work is in a class by itself; an unpredictable amalgam of fun, intelligence, breeziness and glorious strangeness that keeps your eyes fed and your synapses sizzling.” --Jim Woodring
Posted by Steve Lafler at 7:49 AM