One Magic Night at the Mezcal Still

When I moved to the city of Oaxaca some 19 months ago, if you told me I was gonna to hang out on Thursday nights with a motley assortment of ex-pats playing bluegrass, country blues, old timey and rock & roll, I'd have been dumbstruck. For one thing, as a very casual guitar player of many years, I'd have told you I simply don't have the chops for it. Well, these fine fellows, also known as the Bodega Boys, are not only indulgent of aspiring musicians, but some of the guys are fine teachers to boot. So it is that I find myself many a Thursday evening by Tony's (Don Antonio's) bodega in San Pablo Etla, a village a few miles out of Oaxaca city, with my near vintage Epiphone guitar in hand, ready to pick, grin and party with the Bodega Boys.

I don't think I can describe the Bodega Boys any better than they can describe themselves, so here I respectfully quote from their myspace page as follows:
The Bodega Boys define all styles, yet are no styles. From Johnny Cash to Bob Dylan, The Beatles to Bluegrass, Hillbilly to Hellbilly, The 50's to the 70's, Acoustic to Electric, The Bodega Boys go where no cumbia, mariachi, or trova group dare. The Bodega Boys line up is continually changing and the set list will forever be a work in progress. On most nights the line up includes Don Antonio as "Toby Juan Adobe" on Vocals, Guitar or Mandolin, Johnny Rico as "The Playboy" on Guitar, Mandolin or Harmonica, Dengue John as "Alpine Elvis" on Fat Bertha the Bass and Washtub Bass Hall Of Famer, Mr. Bill Blackson as "Black Bill" thumpin' along on the one string. These days you may also find swingin' Bodega Boy Mississippi-Boston-Berkeley Brian as "The Hammer", UK Chet MATT-kins CGP on the 6120, Jazzy Jeff as "Jefe Jeffe" and Esteve as "The Red Headed Boy".

All I really need to add is that these guys are called the Bodega Boys because they play under the stars at Don Antonio's Bodega, that is to say his storage shed/workshop, which is on his fantastic country estate that includes a Bed & Breakfast guest house. Come Thursdays, the Boys set up on the patio in front of the Bodega and have a go at it. 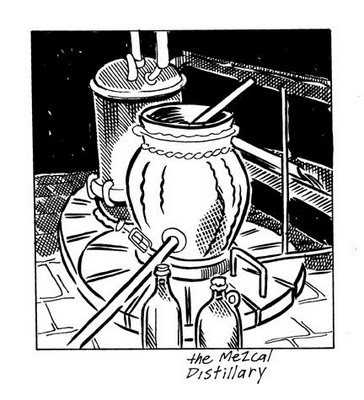 Understand, this is all a prelude to my description of last weeks session. Instead of a regular evening of music by the bodega, Don Antonio had something more amazing yet up his sleeve. You see, less than 100 meters from the bodega, up a winding path, is the site of his Mezcal distillery. Mezcal is a distilled spirit made from agave (a.k.a. maguey) cactus. It's production and consumption is principally associated with Oaxaca. Smokey, smooth and sweet, it is not to be confused with Tequila, which is made only from Blue Agave. There are many variants of Mezcal, depending on the agave used, and of course on the distillery and the skills of those involved.

Just before this particular Thursday evening, Don Antonio sent a message to the Bodega Boys that he would be transforming Shi Shi to Mezcal, and advised that it would be a magical event. Now I'm the farthest thing from an expert on the distillation process, but I believe that he was referring to the third and final round of distillation that creates his top grade of mezcal.
I arrived fairly early in the evening to find the maestro at work with only one other observer at the still. Don Antonio actually has two stills, one the standard Kentucky/Tennessee metal barrel still, and the other a classic ceramic Oaxacan still. Each set up was slowly dripping hot mezcal, perhaps a quart every thirty minutes or so.

As the Shi Shi goes through the stills and comes out as mezcal, Don Antonio collects it in large glass jugs then transfers it to smaller bottles. He runs a test on each bottle for it's alcohol content and marks it with the pertinent information.
Within minutes of arriving, I'm offered a jicara (a small cup made from a gourd) with a taste of the latest bottling. It's hot and sweet, different from any mezcal I've tasted, slightly sour instead of smokey. It reminds me of hot sake while being something completely different—it's delicious, seductive and very much to my taste. Don Antonio checks the alcohol content of the bottling and it's 46%. Asked to guess at the content, I'd guessed 30 - 35%, as it's so smooth. Wrong!

Over the next half hour, the Bodega Boys and several friends trickle in to the site of the still, in jovial spirits. For many it's the first time visiting an active distillery—all us first timers are very curious about the project. Don Antonio is a great host, somehow managing to explain bits of mezcal and distillation lore and history to the assembled company while staying completely focused on the task at hand: running two stills simultaneously. Some of the Bodega Boys, such as Dengue John, Johny Rico and Jefe Jeff, are old hands at this and they pitch in, assisting with both the chores and explanations.

All the while, our gracious host is passing samples around from various stages of the days work. Needless to say, an early bottling of more than fifty percent alcohol is popular and draws enthusiastic comments.
Small jicaras are passes around with hot fresh mezcal, but the real treat is the communal jicara. Don Antonio fills a large jicara with a good six or seven shots of mezcal and instructs the assembled to pass it around. Some have a sip, break out in a big smile and pass it, while others thoughtfully linger over it for a bit.
Me, I'm driving a good ten miles back from the campo to my house in Oaxaca city later in the evening, so I stick to the odd sip of the latest batch rather than downing shots. It is easy to lose count, and the mezcal works it's magic on me to some degree. Ultimately I keep a grip on my consumption and wits so I'm able to make it home safe and in good order... but not before strapping on my Epiphone for a few tunes with the Bodega Boys!

Somehow or other, in the cramped space around the two stills, we squeeze in Don Antonio, Johnny Rico and myself on guitar, a visitor named Garth on mandolin, Dengue John on stand up bass with Bill Black and Jefe Jeff ringing the proceedings with the two wash tub bass attack. Despite working and sampling all day, Don Antonio tunefully croons some of his favorites and handles his vintage Guild guitar with aplomb, notably Folsom Prison Blues and They're Gonna Put Me in The Movies. He never misses with his signature song, The Ballad of Thunder Road, about Appalachian bootleggers. It's a rollicking tragic country romp of a tune, immortalized in a noirish Fifties movie starring bad boy Robert Mitchum. Clearly, Don Antonio loves this tune and relates to the renegade bootleggers that it chronicles.
The boys roll out two or three tunes at a crack then refocus on the matter at hand: Fresh hot mezcal! After all, we can make music any Thursday night, tonight is about creating a different flavor of magic.
Posted by Steve Lafler at 7:11 PM

Hey Esteve,
Sounds lie a good time. I felt like I was there while sipping my home brewed Cofee!
How is the amt % of alcohol measured anyhoo??

I watched Tony measure the alcohol content several times, he took a tall graduated beaker and put something in it that looked like a packet of metal pellets, and a thermometer. But honestly, I have no bloody idea what he was doing. He is clearly an alchemist.

Oh, and of course mezcal went into the graduated beaker too, you gotta have some of the hooch in there if you want to measure the alcohol content!