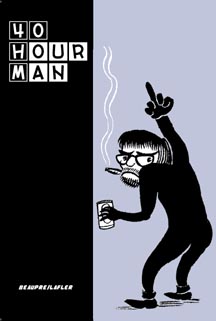 Here we are, fine with me! Yup, in my 26th year as a professional cartoonist, publisher and all around hell raiser, I am returning to the undignified, rough & tumble hell-hole of independent comics publishing. Just this week I have released 40 Hour Man, details to follow, but first:

A quick recap sports fans! I pumped out about ten books/comics in the first half of the '80s (mostly as Cat-Head Comics) before hoodwinking Fantagraphics into footing the printing bill for ten issues of my acid addled Dog Boy series.

Inevitably, the roof caved in, the bottom fell out and Cat-Head was back for another bravura run of like 35 comic books, magazines and even a couple graphic novels. WOW!

Uber comics enthusiast Brett Warnock of the fledgling Top Shelf syndicate took notice of my (ahem) brilliant BugHouse comics, and I signed on with them fine fellas for three full graphic novels of someone else paying the printing bills. Haleluiah!

Yet here we are agin, an old dog (that's me) with a new trick (Manx Media). Now I've gone and published 40 Hour Man with my old friend and fellow traveller Stephen Beaupre. Looks like he wrote the damn thing, and I drew it. For sure. It's fuckin' great, take my word for it. If you don't believe me, just read the damn press release, the guys that write these things never lie!

The press release, as it were:

Take this job and love it!

Portland, Oregon. June 9, 2006.
Manx Media proudly announces the publication of 40 Hour Man, written by Stephen Beaupre and illustrated by Steve Lafler. This inaugural title from Manx Media is the chronicle of one working stiff’s journey into the minimum wage heart of the American Dream.

Is it a career or just a series of lame jobs? It’s all here—from doing time as a miniature golf lackey, to going bust in the internet boom. Beaupre recounts skirmishes with bad bosses, crazy co-workers, sex, drugs and polyester uniforms as he delineates his quest to find and hang onto a job he can live with. Lafler supplies visual hilarity with his Mad Magazine inspired, slap-happy artwork.

Stephen Beaupre is is best known to comic aficionados as the former co-publisher of the Cat-Head Comics imprint and editor of Buzzard, the 90's preeminent comic anthology. Post-comic pursuits include Beyond the Fringe, a long-running humor column featured in Worcester Magazine, and hard time in the Internet trench as writer/editor for popular online destinations such as Angelfire, Tripod, and Monster.com.

Steve Lafler is the cartoonist behind BugHouse, Baja and Scalawag (all from Top Shelf Productions), a trio of indigo toned graphic novels about bugs playing be-bop jazz.

Manx Media has signed a deal with Biblio Distribution to handle our book trade distribution. 40 Hour Man will be available to every last bookstore in American round bout October 1st. Until then, you can visit Manx Media to order you copy directly from us.

That just about covers it.

Anyone who has read this far, rest assured I love you dearly and have your best interests in mind.
Posted by Steve Lafler at 8:35 PM

I just have to say how much I appreciate a site like this! Good stuff.

Hey Steve!
I just bought a copy with Paypal.I can hardly wait for when the Mailman brings it!